There are a lot of big names involved

Rick and Morty has gone from being a cult fave to full-blown phenomena in the last year or so. And a lot of its popularity in the UK can be put down to it appearing on Netflix. Far from it being stuffed away late at night on its original home of Adult Swim, it is now easily available for any Netflix subscribe to binge to their heart's content.

There is more Rick and Morty coming soon - but in the mean time, if you are looking for similar to watch, Netflix might have the answer. 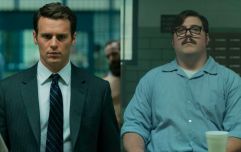 Mindhunter could return for a new series after Netflix development

END_OF_DOCUMENT_TOKEN_TO_BE_REPLACED

Final Space was added to Netflix UK a few weeks ago, and it is very much in the same ballpark. It is another adult cartoon with a sci-fi theme. But this time it is about an astronaut named Gary, and his alien friend Mooncake, and the adventures they have in the galaxy. It has also been compared to Bojack Horseman and Futurama.

It also has a great voice cast, including John DiMaggio (Futurama), Fred Armisen (SNL, Portlandia), David Tennent (Dr Who), Ron Pearlman (Hellboy) and Xzibit (we don't need to tell you how Xzibit is).

Indiewire called it "a rare well-rounded, feel-good animated sci-fi comedy," and Screen Rant described the lead character Gary as "an amalgam of Homer Simpson and Fry, but one who’s draped himself in the unearned swagger of a man aching to be Han Solo".

The first season of Final Space is streaming on Netflix now.