Fans of Eurovision winners Maneskin have defended the band after they faced accusations of drug taking during the live show on Saturday night.

END_OF_DOCUMENT_TOKEN_TO_BE_REPLACED

Footage from the show went viral on Twitter as many said that it looked like band member Damiano David was using cocaine whilst sat at the Italian table with his band mates.

Damiano has been forced to strenuously deny the claims, saying that he was in fact bending over because the band's guitarist, Raggi, had broken glass.

Many of the band's fans have now taken to Twitter to prove Damiano's innocence. Ignoring the fact that it would be such a moronic thing to do at an event that is probably the biggest of Damiano's life and has hundreds of cameras present with hundreds of millions watching at home, it does also seem that it logistically does not add up.

One Twitter user pointed out that, in the footage, the table is much lower than Damiano's head when he bends over.

Never heard someone can snort cocaine in the air (do you see how low is the table behind this bottle holder?). Just stop with the cocaine accusations and let them have their moment and celebrate the victory as they should! #Eurovision  #escita pic.twitter.com/YyqTaYRwH8

They also pointed out, along with others, that there had in fact been a broken glass just like the Italian band member had claimed.

To everyone who keeps saying Damiano was using drugs: here's the proof that Thomas really broke that glass as they said in the Press Conference.
LET'S SHARE THIS PLEASE #Eurovision  #maneskin “state zitti e buoni” pic.twitter.com/duIrsUpOrh

No sooner had Maneskin won the Eurovision title for Italy than the lead singer was being asked about the allegations of drug taking at the press conference afterwards.

Italy’s #Eurovision lead singer when asked about the video circulating of him appearing to sniff something off the table on live TV. 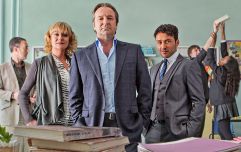 END_OF_DOCUMENT_TOKEN_TO_BE_REPLACED

The band have even had to release a message on their Instagram rubbishing the claims.

Nevertheless, nothing can be taken away from how successful a night it was for Italy, as they absolutely stormed the public vote on the night to pip France to top spot.

It is the first time that Italy have won the contest since 1990, with Maneskin also becoming the first group to win the competition in 15 years.

popular
Why United vs Villa and Chelsea vs City are happening at the same time
'Loch Ness Monster' caught on drone footage by wild camper
The JOE Friday Pub Quiz: Week 262
Foreign workers to be let into UK to help solve petrol crisis
Man blocks pavement with fence to stop chippy customers staring into living room
Iceland boss points out UK has more food banks than McDonald’s branches
Man accused of having sex with horse escapes from jail
You may also like
Entertainment
Johnny Depp blasts cancel culture and says 'nobody is safe'
Entertainment
Applications to appear on the next season of Gogglebox are now OPEN
Entertainment
Tributes paid as Sex and the City star Willie Garson dies aged 57
Entertainment
Daniel Craig says Bond shouldn't be a woman as they should have their own great roles
Entertainment
Jeremy Clarkson 'worried' about Kaleb Cooper's future
Next Page