Channel 4 refused to air the footage

An escape artist has revealed how he managed to escape from the inside of a dead cow by crawling out of its bum, branding the stunt as "incredibly difficult." 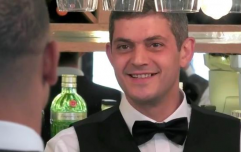 END_OF_DOCUMENT_TOKEN_TO_BE_REPLACED

Welsh stuntman and escape artist Jonathan Goodwin is no stranger to bizarre stunts that would make the average Joe wretch. Having previously escaped 50,000 bees, Goodwin set his sights on a new goal spurred on by a similar stunt from Harry Houdini himself.

"Houdini was apparently sewn up inside a dead whale and tried to escape. I just thought, 'That's utterly arbitrary'," he told Danny Wallace and Phil Hilton on their Manatomy podcast. "Normally an escape is based on something everybody knows it's very difficult to escape from - like a prison or a safe or whatever."

Unfortunately, Goodwin could not find a dead whale lying around and decided that a cow was "the next best thing." The stunt was part of a 2005 Channel 4 special called The Seven Stupidest Things to Escape From.

The 42-year-old explained: "It was incredibly difficult, because it was at the tail end of the whole mad cow disease thing, so to get somebody to agree to give us a cow was not easy.

"It was a cow that was already due to be slaughtered."

Describing the experience as "perfect", Goodwin continued to say he was "tied up and put inside", at which point they tied it up "like a big shoe - with legs." 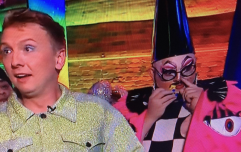 END_OF_DOCUMENT_TOKEN_TO_BE_REPLACED

"It was a very, very difficult thing to escape from. I couldn't really breath in there and it was very heavy," he added, also recalling how his "accidental comedy genius" father shook his hand once it erupted from the cow's behind.

Ultimately Channel 4 refused to air the footage, saying, "We can't put this on television." However Goodwin harbours no ill will and still thinks back to the stunt with joy, as "Channel 4 back in the day, that's a badge of honour that they refused to show it, because they would do anything."

popular
The JOE Friday Pub Quiz: Week 308
Multiple fatalities after planes collide mid-air over airport
Former Playboy Bunnies detail what it was like having unprotected orgies with Hugh Hefner
Pilots fly over destination airport at 37,000 feet - because they were both sleeping
Incredible case of the only known individual whose parents were two different species
Mum cuts off boyfriend's 'private parts' after he 'tried to rape 14-year-old daughter'
Man plunges to his death after drawbridge opens as he was crossing it
You may also like
Entertainment
First Dates' Merlin Griffiths back in hospital with cancer complications
Sport
Channel 4 have worst England win percentage of all broadcasters after 4-0 Hungary loss
Entertainment
Michael Owen trolled on Channel 4 over teenage daughter's debut on Love Island
Entertainment
A Brooklyn Nine-Nine one-off special is nearly here
Entertainment
Gogglebox star Mary faces calls to be removed from show over Boris Johnson comments
Next Page