Game of Thrones fan favourite Maisie Williams could be the latest actress to pop up in a superhero film.

According to reports in Hitflix, Miss Arya Stark could soon be joining the X Men universe to rub shoulders with Charles Xavier's fledglings.

END_OF_DOCUMENT_TOKEN_TO_BE_REPLACED

X Men Apocalypse is still yet to hit your cinema screens, but work is already being done on sequel film New Mutants,  which will showcase the next generation of superhero stars. If these reports are any indication, then Maisie could be playing the mutant Wolfsbane, also known as Rahne Sinclair.

Wolfsbane's power? Transforming into a wolf at will. Kind of fitting considering House Stark's sigil is a direwolf in Game of Thrones.

Also rumoured to be cast in the New Mutants film is Anya Taylor-Joy, who allegedly will play Magik, aka Illya Rasputin and Colossus' sister. 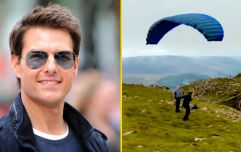 END_OF_DOCUMENT_TOKEN_TO_BE_REPLACED

Directed by Josh Boone (the man behind 'The Fault in your Stars') New Mutants will see Storm lead the next generation of mutants. James McAvoy has already signed on to reprise his role as Charles Xavier.

Maisie Williams as a shapeshifting wolf in the X Men universe? If the reports are true, someone give the casting director a raise.

popular
Runner finishes last in 400m race as penis keeps falling out of shorts
Teacher's sex abuse sentence delayed after she gives birth
Massive piece of Elon Musk's spacecraft lands on farmer's property and could make him very rich
Inbetweeners star Joe Thomas has been in a relationship with his co-star for over 10 years
Tourists left 'squealing' as thousands of venomous crabs invade UK beach
NASA scientist's desperate plea before being arrested
Woman almost died during sex when orgasm popped aorta
You may also like
Entertainment
Ezra Miller accused of leading a cult, wearing body armour and carrying a gun everywhere he goes
Entertainment
Police hunt Bradley Cooper lookalike after he steals from Home Depot
Entertainment
Jennifer Coolidge says playing 'Stifler’s mom' in American Pie helped her bed '200 people'
Entertainment
Conor McGregor to star in reimagined 80s classic alongside Jake Gyllenhaal
Entertainment
Batgirl axed by Warner Bros after terrible reviews and won't be released on any platform
Next Page