Kate Garraway has pulled out of Good Morning Britain because her husband Derek Draper has taken a "very serious" turn. 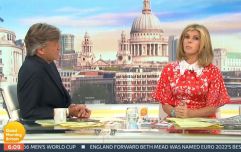 END_OF_DOCUMENT_TOKEN_TO_BE_REPLACED

Draper, 54, has been rushed back to hospital as he continues a horrific battle with long Covid. He caught the virus at the start of 2020 and spent 13 months in hospital. The former Labour advisor was able to return home but has still been suffering with major health problems. He is unable to fully communicate and also struggles with his mobility.

It was only weeks ago that Garraway, 55, said she hoped her husband was improving, but a source close to the family has confirmed that Draper is "seriously unwell" and receiving specialist care in hospital.

Garraway has also pulled out of her mid-morning radio show on Smooth FM. 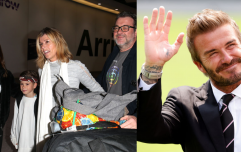 END_OF_DOCUMENT_TOKEN_TO_BE_REPLACED

The source told The Sun: "Derek has been taken back to hospital this morning in a very serious condition. The family are very worried about him but Derek is in the best hands.

"Kate is by his side and is keeping it together as best she can. She’s a total professional and devoted to her work – both on Good Morning Britain and Smooth - but she had no choice but to step away this week to be there with him.

"This is an incredibly difficult time for her and their family."

Kate Garraway and Derek Draper with their two children (ITV) 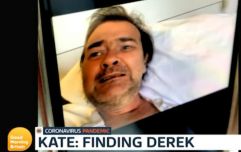 END_OF_DOCUMENT_TOKEN_TO_BE_REPLACED

The couple had been enjoying spending time at home with their two children Darcey, 16, and Billy 12, though Garraway had admitted she was "exhausted" from doing all she can to help her husband recover.

Draper's journey has been documented in two ITV programmes called Finding Derek and Caring for Derek. Heartbreakingly, one revealed how it took months before he was able to tell his wife he "loves her" again, for the first time since he had become unwell.

The second film also revealed how, in November, Garraway secretly flew her husband to North America for a ground-breaking medical trial.

popular
Multiple fatalities after planes collide mid-air over airport
Gerard Butler breaks silence after death of 'brother in arms' Darius Danesh
UK city named the 'most dangerous' in Europe, according to study
Incredible case of the only known individual whose parents were two different species
Mum cuts off boyfriend's 'private parts' after he 'tried to rape 14-year-old daughter'
Man gets full sized Stella tattoo on his head because he loves the drink that much
Rachel Bilson says Bill Hader's 'big d***' is the thing she misses most about him
You may also like
News
GMB's Kate Garraway forced to stop debate amid on-air chaos
News
Kate Garraway's husband Derek returns home after a year in intensive care
News
Kate Garraway shares first picture of husband Derek a year after he contracted Covid
Entertainment
The JOE Friday Pub Quiz: Week 307
Entertainment
Lisa Kudrow hits back at fans complaining about lack of diversity in Friends
Next Page