We knew it wouldn't be long before Jeremy Clarkson was back behind the wheel.

Just weeks after Clarkson was sacked by BBC bosses over the notorious 'fracas', it looks like he's raring to go on a new car show.

But it won't be Top Gear.

Even he admits he's p*ssed on those chips now.

But onwards and upwards, as they say. 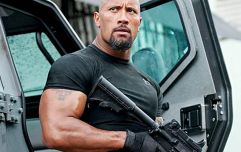 END_OF_DOCUMENT_TOKEN_TO_BE_REPLACED

"I have lost my baby but I shall create another," Clarkson told the Sunday Times.

"I don't know who the other parent will be or what the baby will look like, but I cannot sit around any more organising my photograph album."

Whatever he gives man-birth to, we hope it has lots of fast cars, wacky features and near-the-knuckle Clarkson bluster.

And if he asks for a hot meal, please just indulge him...

popular
Groom shocks wedding by playing video of his bride cheating with her brother-in-law
Astrologer predicts how World War 3 would start and end - it doesn't look good for anybody
Man has hand 'chopped off' outside working men's club in attack like 'a horror film'
SeaWorld responds after footage showing killer whales attacking each other leaves visitor in tears
Runner finishes last in 400m race as penis keeps falling out of shorts
FIFA consider moving start date of 2022 World Cup
Tens of thousands rush to sign-up to 'Enough is Enough' campaign - crashing their website
You may also like
News
UK speed limit on 60mph roads to be reduced to 30 and 20mph for the first time
News
Drunk driver blames covid when caught on motorway with two missing tyres
News
Warning of road chaos on Monday as fuel protests planned across UK
News
Driving with a dog in your car could land you with a £5,000 fine
News
You could be fined £1,000 fine for sharing speed camera locations to friends
Next Page