There isn't a dry eye in the house here after watching this video of Irish mother Grace Fanning be reunited with her daughter Fiadh, earlier this week. 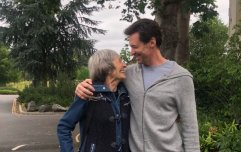 END_OF_DOCUMENT_TOKEN_TO_BE_REPLACED

Grace received the an amazing welcome home when she returned from an away patrol on the Irish Navy ship, LÉ Róisín.

Fiadh is just two years and nine months old and can't contain her excitement at seeing her mother arrive at the door. She clings on to her for dear life in what looks like the best hug of all-time, before excitedly telling her to come inside for a party.

Grace, who lives in Cork with her partner Carol told Her.ie: "It was heartbreaking leaving her, but amazing coming home." Fiadh clearly agrees.