What a gripping episode of Celebrity Big Brother last night was. Housemates found the cure for cancer, cancelled all world conflicts and reduced the extortionate price of Freddos.

Just kidding, they did very little.

The highlight was undoubtedly Dapper Laugh's greed resulting in an accidental pantsing situation.

1. Ashley forgot to de-Smurf herself


Many had long suspected that Ashley was a Smurf, but the proof annoyingly never seemed to present itself. That is, until last night's episode of Celebrity Big Brother. Shane J and Ann were talking in the smoking area when Ashley headed out to join them. She had blatantly forgotten to de-Smurf her face, although had successfully covered every other area of her body. Finally, we have confirmation, thanks to the 24 hour live coverage on CBB. Ashley James is a Smurf. She lives in a tiny little mushroom house in the forest and signs her names as 'Smurfette' on all legal documents. At last, the truth is here.

2. Ginuwine can't do that finger snap thing every used to do in school

He might have been a hugely successful R&B artist in the 90s, but Elgin Lumpkin falls short of societal acceptability in terms of his coolness. During an announcement on last night's CBB, Ginuwine was trying to do that thing where you shake your hand and snap one finger off the others. But guess what? He couldn't bloody do it, could he. Ginuwine reportedly has a net worth of $5m, but all the money in the world can't make up for the fact that he is a failure when it comes to being A Cool Dude.

3. Malika, a regular on Keeping Up With The Kardashians, said that she isn't used to being around 'phoney' people


Lol. Okay Malika, being around people that are altering their personalities for the sake of nearby cameras is a concept that is completely alien to you. Never have you seen such outrageous behaviour such as people being unfeasibly nice to others and presenting the best version of themselves in the hope of mass adoration and subsequent audiences to sell everything apart from their liver to. Good one. Pull the other leg why don't you? 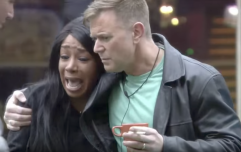 END_OF_DOCUMENT_TOKEN_TO_BE_REPLACED

4. Daniel was pantsed by a selection of tinnies

Last night was Daniel's turn to go on a booze run to the kitchen. Having previously seen Wayne's superhuman abilities at transporting large quantities of alcohol on his person, Daniel was suitably feeling the pressure. Such was his commitment to succeeding at an abundant transportation of booze, he ended up dropping trow as soon as he reached the bathroom. He entered the room shouting "Quick! Get the cans!", but it was too late. His pants had already reached his knees thanks to the malicious act of a selection of tinnies.

Personally, I keep a glass of water beside my bed, but that's just me. Ginuwine, seen above sharing a bed with his beloved showmance co-star Ashley, has a number of items resting on his bedside locker. Most notably, he's got three roll-on deodorants. Even if this isn't intended for bedtime use, how long does Ginuwine think this series of Celebrity Big Brother is going to last? A roll-on deodorant lasts for ages, there's no way he's going through three of them in the space of a couple of weeks. There's an underlying reason here and I'm going to figure it out if it kills me. Please stand by.