Heat is nothing short of a masterpiece.

It also could be getting a prequel in the near future.

According to Deadline, Michael Mann has just signed a deal to start his own book imprint, Michael Mann Books, which aims to curate a series of books that can be fast-tracked for film and TV adaptations.

Top of the "to-do list" for the publisher? An origin story for Heat.


The novel will look to cover the rise of the heavy-hitters from Mann's film, including detective Vincent Hanna (Pacino), robber Neil McCauley (De Niro), and his accomplice Chris Shiherlis (Val Kilmer). Assuming the book is well received, a film adaptation would be a mere formality (Here's hoping Mann would be up for directing a sequel too). 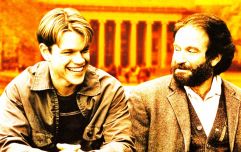 QUIZ: How well do you know the films of Matt Damon?

END_OF_DOCUMENT_TOKEN_TO_BE_REPLACED

With Heat turning 20 late last year, there's certainly a buzz around the world of Hanna vs. McCauley.

Heat itself is a remake of a 1989 made-for-television movie, LA Takedown, also directed by Michael Mann. So he certainly likes to re-visit previous work. And when you've made such classics as Heat, that's not necessarily a bad thing.

As a final note, may we also suggest Tom Hiddleston for one of the key roles? As you can see, he's a big Heat fan.

You may also like
Fitness & Health
How to get in movie star shape, from an A-list personal trainer
Entertainment
QUIZ: Identify 99 movies from the 90s by a single image
Entertainment
Here's how you can request movies and TV shows on Netflix
Entertainment
The Greatest Film of All-Time?
Entertainment
Here are all the new titles that are coming to Netflix in August
Next Page