On what would have been her 90th birthday, today (April 4th 2018) Google Doodle is celebrating the life of iconic poet, author and important civil rights activist Dr. Maya Angelou. 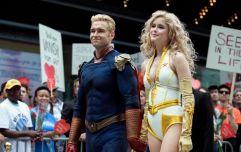 END_OF_DOCUMENT_TOKEN_TO_BE_REPLACED

Inspiring the likes of 2Pac, Dave Chappelle, Serena Williams, Common, Nicki Minaj, and even President Barack Obama, Maya Angelou is more than just her literature, she was, and still is, a beacon of hope. Loved by many, she is regarded as one of the most important and most influential writers in American History.

The Google doodle found on their homepage today features Angelou reading her most famous poem, "Still I Rise". But it's not just the good doctor's voice that can be heard. Alongside her son Guy Johnson (who is an accomplished author and poet in his own right), singers Alicia Keys and Martina McBride, and actors America Ferrera, Laverne Cox and Orpah Winfrey can be heard reciting the poem.

Born Marguerite Annie Johnson on April 4th 1928, in St Louis, Missouri, before being raised in Arkansas, Angelou's strength was evident very early on after a traumatic incident where she was sexually assaulted at the age of seven left her mute for five years. It was at this time she took solace in books and poetry which in turn launched her into a lifetime of literature.

Writing a total of seven autobiographical books, starting with 1969’s I Know Why the Caged Bird Sings, detailing her younger life while dealing with subjects such as rape and racism, which brought her international acclaim, she went on to publish several other books including 1978's And Still I Rise.

END_OF_DOCUMENT_TOKEN_TO_BE_REPLACED

She received more than 50 honorary degrees for her writing, and in 1993, Angelou read her poem "On the Pulse of Morning" at the inauguration of President Bill Clinton. It was only the second time a poem had been recited at an inauguration, the first being Robert Frost’s recital at President John F Kennedy’s ceremony in 1961.

Sharing her birthday with the date on which her friend and fellow civil rights activist Dr. Martin Luthor King was assassinated in 1968, she was also friends with Malcom X, and helped him set up new civil rights group - the Organization of Afro-American Unity - before he was killed on February 21st 1965.

"Through her works, Dr. Angelou gave a voice to millions. She championed women’s rights and gender equality. She redefined black beauty and celebrated African American oral traditions. She advocated against war and campaigned for universal peace.

"Though we honour Dr. Maya Angelou's courage and compassion today, her words will continue to awaken hope around the world for years to come."

popular
Wagatha Christie: Wayne Rooney describes 'awkward' moment he asked Jamie Vardy to get his wife to 'calm down'
Johnny Depp's lawyers reveal poignant reason why actor refuses to look at Amber Heard in court
Awkward moment Piers Morgan is a called a c**t by a guest on his own talk show
Julia Fox says Amber Heard was not 'powerful enough' to abuse Johnny Depp - and people are divided
FootballJOE's Career Path Quiz: #6
UK’s Sam Ryder may have actually come third amid possible Eurovision voting scandal
Amber Heard admits she didn't honour promised $3.5m donation to civil liberties group with $7m from Depp divorce
You may also like
News
Michelle Obama 'not surprised' by Meghan Markle's claims of racism in the Royal Family
News
Obama, Bill Clinton and George Bush are all willing to get vaccinated on-camera
News
Barack Obama says he "screwed up" not giving Dolly Parton a Presidential Medal of Freedom
News
Barack Obama tipped to become ambassador to UK under Joe Biden
News
Joe Biden breaks record for most votes in a US presidential election
Next Page