Maybe he should finish the books first before saying that?

George R.R. Martin has said that he thinks Game of Thrones should continue past the eighth and final season.

Speaking to The Hollywood Reporter at the New York City world premiere off the new season, he says he would like to see the television adaptation of his epic saga continue.

"I don't think it should be the final season. But here we are."

In particular, he was shocked about how quickly time has passed.

"It seems to me we just started last week. Has it been longer than that? The time has passed by in a blur. But it's exciting. I know it's an end, but it's not much of an end for me."


And while the screen version of the series is about to end, George R R Martin is going to be consumed by the franchise for a good while longer. 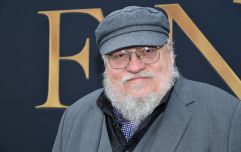 George RR Martin gives update on his next books, and his take on the Game of Thrones finale

END_OF_DOCUMENT_TOKEN_TO_BE_REPLACED

"I'm still deep in writing the books. We saw five other sequel shows in development. I think I'm going to be hanging around Westeros while everyone else has left."

He also went on to say that the upcoming spin-off Game of Thrones pilot was "definitely very different" to the parent series.

"It's set thousands of years in the past. You're looking at a whole different era of Westeros. No dragons, no Iron Throne, no King's Landing. It will be interesting to see what the fans make of that."


popular
QUIZ: How did these Game of Thrones characters die?
Personality Quiz: Which Inbetweeners character are you?
QUIZ: Can you guess the biscuits we've zoomed in on?
The JOE Friday Pub Quiz: Week 194
QUIZ: Can you complete the Arctic Monkeys song lyrics?
QUIZ: Name the 25 youngest scorers in Premier League history
QUIZ: Guess the footballer from their Wikipedia page