Not sure if you've heard, but GAIL PLATT shot LORRAINE KELLY in the LEG with an ARROW.

END_OF_DOCUMENT_TOKEN_TO_BE_REPLACED

That's it. That's the news. That is what has happened in the fictional world of Weatherfield, on Coronation Street.

You may have missed this absolute spectacle, but not to worry because luckily it was all captured on video, as is the case with most television shows.

As evidenced above, the acting was sublime and the special effects were Oscar-worthy. We contacted Hollywood for a comment and they simply replied with "Wow".

END_OF_DOCUMENT_TOKEN_TO_BE_REPLACED

In order to fully appreciate the sequence of events, we must break them down, scene by scene, trying to make sense of what I am comfortably deeming The Greatest Arrow-Maiming Scene of 2019.

Pulitzer judges, please forward all enquiries to my gmail, thank you. 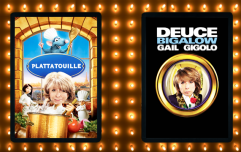 END_OF_DOCUMENT_TOKEN_TO_BE_REPLACED

Gail smugly tells Audrey, "You heard what the instructor said, steady hand and a keen eye" as she looks down the shaft of her visibly crooked bow with all the determination of a cold-blooded killer. David blankly stares ahead, all too aware of what's about to transpire. He's read his mother's diaries, seen the vision boards, noticed the open browser tabs, felt her palpable thoughts. This isn't a fun family activity, this is a setup. The air is heavy with anticipation. Something is going to happen.

The sound of an arrow swooping through the air like a bird pouncing upon its prey washes over the visuals, followed by an arrow landing comically far from the target. It's clear that the shooter is an inexperienced archer, or so they'd like us to believe. These certainly can't be the fruits of the efforts of a woman who has just smugly informed us all of the secret to landing a good arrow placement, certainly not. This must be a complete novice, perhaps an infant or a person without sight nor the relevant appendages that would be beneficial to an archer.

Act I, Scene III - The Reveal

Wait. What? WHAT? It was Gail "steady hand and keen eye" Platt who displaced such a wayward arrow into the block of wood propping up the target. This simply doesn't add up, the woman was as good as a pro based on her opening statement. Now her son is laughing at her. Perhaps she doesn't possess the necessary skills to be a successful killer. "Darn" she says, like a furious Enid Blyton character who's just been called in for dinner earlier than expected, meaning she can't resuscitate a rambunctious porcupine that was trapped down a well. Gail is furious at her supposed ineptitude for archery.

Quick to body her own daughter in defeat, Audrey interjects with a smug "What happened there, Gail? The steady hand or the keen eye?" and laughs a little too hard at her own remark. Gail shoots her a look that could turn milk sour, then back to being fresh, then immediately back to sour again. She's furious. Gail Platt paid attention to the instructor, even memorising their advice. She wore a smart turtleneck and blazer combination, she pushed her hair to its limits, volume-wise, she came here to win. This is either a crushing defeat or an expertly calculated performance.

Not content with being perceived as a failure in the eyes of her own mother, Gail quickly reloads her armoury and steadies herself to make another shot. Damage control is in full swing as Gail hopes to erase the memory of her past failures by nailing this next attempt, thereby reminding everyone present that she might be the buffoon who brought Richard Hillman into all of their lives, but now she could shoot him stone dead using just a bow and an arrow. Audrey is clearly awaiting another embarrassment to unfold, as is her default expectation when it comes to anything Gail ever does.

Just as Gail takes the strain on her arrow, Audrey shows little regard for her daughter's attempt to redeem herself, easily distracted by the suspected presence of Natalie. "Ooh, is that Natalie?" she says, in a voice higher than most people over the age of 35 can hear. As it happens, it was Natalie, but that's entirely relevant to what's going on here. Audrey's carelessness around a weapon is unforgivable. Suppose Gail was holding a rifle and the ice cream van pulled up behind them unexpectedly, its siren disabled out of respect for the local residents. "Ooh, is that an ice cream van?" Audrey would say, fishing through her purse for coins, bullet shattering her skull on impact. Her lack of general safety practice in such a dangerous environment is staggering.

Startled by Audrey's canine-like yelp, Gail misfires the arrow, releasing it as she turns around to see if it actually is Natalie who's come to join their archery day out bonanza. David, yet to pick up a bow and arrow himself, sees what's unfolding in slow motion. That arrow has to land somewhere and it's unlikely that it'll be hitting the target this time. Credit where it's due, Gail's technique was stronger during this effort, employing a steady hand and a keen eye on this occasion, unfortunately teaming that with a last-minute interruption to her aim. Gail is visibly worried. Where is the arrow going to land?

A delayed and frankly quite exaggerated "Ouch" is heard off screen, coming from an area that defies all realms of science and logic based on where Gail was pointing the bow and arrow at the time of its release, but this is Coronation Street logic, baby. All apart from Audrey, the architect of this entire predicament, turn around to see who has been arrowed by Gail. Even Natalie, another key player in this senseless act of violence, is looking over in bewilderment. Everyone is eager to learn the extent of this vocal wimp's injuries, but also their identity. It's also worth noting that both men casually have their hands in their pockets, signifying a lack of respect for the hidden dangers of beginners' archery.

It's only ITV's Scottish sweetheart Lorraine Kelly who's been struck by Gail Platt's wayward arrow and she's finally dropped the pleasant act she's carefully spent a lifetime cultivating. "You daft wee woman, you could've killed me", Lorraine alleges, limping into focus, clutching her remarkably clean entry wound which somehow avoided the tent panel she was standing behind at the time of the attack. Why did Gail Platt try to kill Lorraine Kelly? And more importantly, why is Lorraine Kelly hanging out at Weatherfield's archery centre during Coronation Street filming hours? Also, why is nobody helping her?

Do not be fooled by the look on Gail Platt's face. This runs deeper than a mere coincidence. Remember back to the first scene. "Steady hand and a keen eye". Audrey and Gail planned this vicious attack and David suspected it from the start, keeping a safe distance from the firing line at all times. They knew Lorraine Kelly would be at the archery centre that day, so booked a seemingly impromptu family day out. Natalie was in on it too, showing up at just the right moment for Audrey to fake an interest in her arrival once Lorraine got into place.

Gail had a split second to shoot her shot, maiming the Scottish star just enough to draw out her dark side. The injury will put Lorraine out of work for weeks, as will the inevitable tirade of insults that followed after the cameras stopped filming. But who will serve as Lorraine's replacement while she's on the mend? Gail Platt. That's who. Her storylines have been a little lacklustre lately, so she's hoping to branch out into the world of daytime TV presenting. How do we know? Well, the following file was found on Gail's computer shortly after the incident occurred.

popular
Stranger Things: Spotify will choose which song would save you from Vecna
Tourist dies after losing arm and leg in shark attack at popular resort
Jordan Peterson suspended from Twitter over Elliot Page comment - says he won't apologise
Adele fans have 'mad respect' for her after she stopped her Hyde Park gig to help someone in distress
Woman sells pics of her thumbs on OnlyFans for £4,000
The JOE Friday Pub Quiz: Week 301
Threesome sees 60-person brawl break out on cruise ship, says passenger
You may also like
Entertainment
12 movies drastically improved by putting Les Battersby in the lead role
Entertainment
Love Island's Hayley Hughes has appeared on television before
Entertainment
Three Coronation Street characters will leave the show next week
Entertainment
Coronation Street character not leaving Weatherfield despite 'exit' airing
Entertainment
Coronation Street's Pat Phelan is finally dead
Next Page