We were hit with the news that everyone's favourite 'fake dad', Paul Ritter, passed away yesterday. Now, Simon Bird, has paid a touching tribute as his fake son

Friday Night Dinner simply wouldn't have been anywhere near the phenomenon it was without Paul Ritter as Martin Goodman. While it was an ensemble cast of equals - perhaps leaning towards the two sons in terms of air time - if there was ever a 'main character' who embodied the very heart of the show, it was him.

After both Robert Popper (the show's creator) and Tom Rosenthal, who played the Jonny, paid their respects on social media yesterday, the latter has now shared a statement on behalf of Simon Bird - Ritter's other on-screen son, Adam:

What’s less well known is that he was also the Platonic ideal of a green room companion: unfailingly generous (with praise, snacks, the Guardian Sport section); unendingly thoughtful (he would set up shop on the floor if he knew there were going to be more actors than chairs in

As Rosenthal explains, Bird - who most of you will know as Will from The Inbetweeners - doesn't have Twitter but, understandably, wanted to pay his respects and share his memories of his 54-year-old "fake dad". As you can see, whilst testimonies to his acting prowess have poured in over the last 24 hours, Bird quickly goes on to focus on the man himself.

He was such a peaceful presence but throbbing with intelligence and - let’s not beat around the bush - entirely capable of a hilariously indiscreet and filthy broadside when in the mood.

What seems to be a throughline in all of the tributes paid by those that knew him well, is that he was immeasurable kind, humble and loving. As Tamsin Greig (who played his wife, Jackie) wrote in her Guardian tribute, "his quiet, loyal, compassionate friendship will stay with me forever" - it seems he left that impact on everyone.

I think I’ll always aspire to be like Paul. I guess that’ll happen when someone pretends to be your Dad for 10 years. I feel unbelievably fortunate to have spent so much time in that green room and hope his real bambinos know how much his fake bambinos loved and looked up to him. 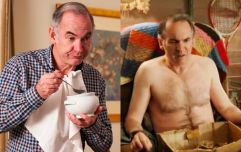 END_OF_DOCUMENT_TOKEN_TO_BE_REPLACED

As Bird goes on to confirm, his capacity for comedy, intelligence and compassion were all in equal measure, it would seem. It's also reassuring to know that there was definitely some of the real Ritter in the character of Martin, as he describes him as "entirely capable of a hilariously indiscreet and filthy broadside when in the mood".

He goes on to round out his fitting testament by saying that he "hope[s] his real bambinos know how much his fake bambinos loved and looked up to him". Oof. Well said, 'Puss-Face'.

popular
PGMOL issue explanation after Cavani goal disallowed due to McTominay 'foul'
Jose Mourinho launches attack on Solskjaer in response to "conning" remark
A definitive ranking of every swear word from worst to best
BBC and ITV viewing figures plummeted during blanket coverage of Prince Philip
This is the hardest Pokémon quiz you'll ever take
Brendan Rodgers condemns Leicester trio for breaking Covid regulations
These are the only 6 ways you can ever leave the pub
You may also like
News
Friday Night Dinner celebration episode to be dedicated to Paul Ritter
Entertainment
Hayden Christensen and Ewan McGregor to start filming Obi-Wan Kenobi series
Entertainment
SpongeBob SquarePants episodes pulled from streaming over 'inappropriate' storylines
Entertainment
David Lammy dismantles caller's argument after they claim he can never be English
Entertainment
Line of Duty: Reddit user explains theory that Buckells is last remaining member of 'H'
Next Page