The Eurovision cocaine allegations rumble on.

One of the more unexpected news stories of the year so far continues to develop as the lead singer of Eurovision winners Maneskin faces accusations of having been caught on camera taking drugs. 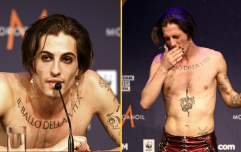 END_OF_DOCUMENT_TOKEN_TO_BE_REPLACED

During the show on Saturday night, footage of the band's lead singer, Damiano David, went viral online  bending down over a table with his nose obscured. Many suggested online that he had been caught in the act of doing drugs.

After Italy's storming victory, the singer was forced to vehemently deny the accusations, with the band also putting a statement on their Instagram story, rubbishing the claims. He claimed that he was bending over because a glass had been smashed. Fans of the band also took to Twitter to defend Damiano.

Well the story isn't going away.

The European Broadcasting Union (EBU) has now released a statement addressing the speculation, and have confirmed that David will take a voluntary drug test to put the uncertainty to bed.

The EBU said in the statement: We are aware of the speculation surrounding the video clip of the Italian winners of the Eurovision Song Contest in the Green Room last night.

"The band have strongly refuted the allegations of drug use and the singer in question will take a voluntary drug test after arriving home. This was requested by them last night but could not be immediately organized by the EBU."

The statement added that the band, their management and the head of delegation had all stated that "no drugs were present in the Green Room" and that David had indeed been clearing up smashed glass. END_OF_DOCUMENT_TOKEN_TO_BE_REPLACED

It continued: "The EBU can confirm broken glass was found after an on site check.

"We are still looking at footage carefully and will update with further information in due course."

Maneskin were crowned champions on the night for their performance, while the UK finished last with a total of zero points.