The Queen and David Attenborough? I ship it.

Last night we were treated to a David Attenborough special with Her Majesty and ours, The Queen. END_OF_DOCUMENT_TOKEN_TO_BE_REPLACED

The documentary centred around the Queen's Commonwealth Canopy, a initiative that aims to set up a global network of protected forests in all 53 Commonwealth countries.

More importantly, The Queen absolutely killed it. It turns out she's actually pretty funny for a 91-year-old. Her and Attenborough got on like a palace on fire and I'd hereby like to put them forward as the new Britain's Got Talents double act hosts.

Here's some essential highlights from the documentary, just in case you missed it.

As they passed a forlorn looking tree, The Queen said, "That one we won't look at because it doesn't seem to be doing very well.... Somebody's sat on it, I think" and Attenborough completely lost it

David Attenborough described a type of tree by saying "One really wants to climb them", and The Queen instantly dropped this expression because her 91-year-old ass was not about to haul itself up a goddamn tree

A noisy helicopter went overhead and interrupted their chat, so The Queen said "Sounds like President Trump... or Obama" and I'm not sure if that's funny or just a typical old person statement 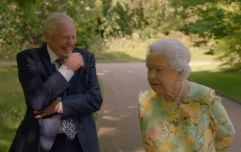 END_OF_DOCUMENT_TOKEN_TO_BE_REPLACED

Prince William caught a fish with his bare hands for absolutely no reason, then plonked it back into the river because it seemed to have no respect for his Royal authority

Boris Johnson legitimately said, "Trees are vital for our happiness and for our sanity and I, in an almost sort of Teutonic way rejoice when I get into a glade or a bosky nook of one kind of another... I won't say in a Teutonic way that I disrobe in order to commune with the forest...", which is a turbo posh way of assuring us that he doesn't run around bollock naked in forests

Angelina Jolie described The Queen as a "really lovely lady", which will surely please Her Majesty to receive such high praise from a woman that used to wear a vial of her boyfriend's blood around her neck

Finally, in a heartwarming conclusion to the documentary, The Queen described her Christmas tree as an "interesting fat one"