Romeo and Juliet are shook.

Diego Maradona has visited Salt Bae's restaurant and left with something much more than a belly full of deliciously salty meat. 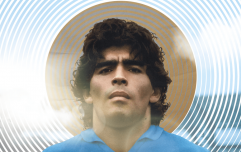 DIEGO MARADONA: The making of the film on a defining chapter in the life of a football legend

END_OF_DOCUMENT_TOKEN_TO_BE_REPLACED

Maradona follows a long line of footballers that have sampled the fruits of Salt Bae's labour, but he appears to be the first one to fall madly in love with the guy.

Take a look at this:

Out of every celebrity that has posted a video of themselves with Salt Bae, this interaction was different.

There was a tenderness between Maradona and Salt Bae that's undeniable.

We must dig deeper. 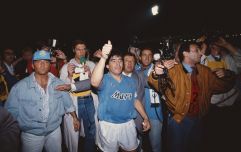 END_OF_DOCUMENT_TOKEN_TO_BE_REPLACED

From the moment the camera starts rolling, Diego and Salt Bae are engaged in an incredibly tender hug for four seconds, until Salt Bae breaks it off, using Maradona's arm as a means of escape. He raises it in triumph, which comes across as adoration for the guy, but is also a blatant way to break the hug that undoubtedly went on for far too long. Someone would've seen the hug, then got the phone out of their pocket, unlocked it, opened the camera app, set it to video and started recording, during which time they were still hugging. We see four seconds of the hug, but it could've been going on for days.

It was a means of hug escape for Salt Bae, but Maradona doesn't clock it. There's visibly a tear in his eye at the overwhelming sensation of getting to meet his hero. 15 months ago, we hadn't even heard of Salt Bae, but here lies Diego Maradona, deceased. Cause of death? Meeting a man that became a viral internet sensation after sprinkling some salt down his arm and onto a piece of meat. Their hug broke into a weird pose that suggests they're halfway through dancing to 'YMCA' together, but it's a very emotional time for one out of the two men involved. They remain composed so as to allow spectators to photograph them together, but Maradona is crumbling inside. This interaction means everything to him.

This is a very tender kiss. It's only fitting as it follows a very tender embrace and an awkward pose. Let's look at their bodies for a second. They've both turned in towards each other, placing affectionate arms in places that just seem to feel right. Where is Diego's left arm? Deep down, we all know that it's grazing the tip of Salt Bae's buttocks and it's a comforting thing to be aware of. They fit together like a glove. One is a footballer, the other is a chef. What have they got in common? Gloves. What's four fifths of the word 'glove'?  LOVE. The kiss is special. Maradona is planting one on Salt Bae as he's envisioned doing since January 2017 when the dude's talents first emerged online. "One day, I will kiss the cheek of that guy", he probably said at the time.

This scene is vital in the plot. We've just seen Maradona and Salt Bae expressing a mutual adoration for one another, but now things are about to be consummated. Maradona closes his eyes in exasperation as Salt Bae arrives with the food. He raises his arm to his face, so as to obstruct such an unsightly view of perfectly cooked meat. He can't watch, for it is simply too satisfying. Meanwhile, Salt Bae gets to work on the meat. He's not in it for the spectacle, he just wants to feed his hungry patrons. Maradona gains the confidence to watch the bones slowly being peeled away from the meat. It's a sexual act, there is no other way to word it, unfortunately. What we are witnessing is sex. Salt Bae has him in the palm of his gloved hands. He pulls those bones slower than is technically necessary, causing Maradona to sweat and provide a pained but euphoric expression.

Once all of the bones have been removed and all appetites sufficiently climaxed, Salt Bae takes the final bone and stabs it through the meat. It does nothing by way of improving the food as it's an entirely unnecessary act, done with the sole purpose of delighting onlookers. For Maradona, it does precisely that. He's entranced by the whole thing. Many of us could've gone our entire lives without seeing a man wearing gloves and sunglasses indoors stabbing a piece of bone through a slab of meat, but I'm glad that now we won't have to. We've seen it and we've seen Diego Maradona's reaction to it as well. He mouths 'WOW' while looking deep into Salt Bae's eyes. This is love.

After the meat has been de-boned and then unnecessarily stabbed, their relationship (which began mere minutes ago) has reached its fitting conclusion. They've done it. But where do they go from here? In front of an entire restaurant full of people? Simple. They gaze into each others' eyes for a moment or two, not long enough for others to suspect that anything untoward is happening, but merely to let one another know that they're both feeling the exact same thing at that particular moment in time. It's love.

They've reached a newfound level of familiarity with each other after the events that have just transpired. They're fully comfortably now. Salt Bae allows Maradona to carry out the vital salt sprinkling task. Maradona can hardly believe his luck. He's being trusted with such a pivotal duty. They've only just met. Now Salt Bae is allowing him to perform the task for which he became famous? Is Maradona going to allow Salt Bae to score the first and subsequently second goal against England in the '86 World Cup quarter final? Is that where things are headed? Only those two men know. We are merely spectators to what is unfolding between them.

Now that the pair have met, fallen deeply in love, basically had intercourse and then reminisced about it together over the course of one minute, there's nothing left for them to do together. It's over, their brief brush with love has passed. What do they do now? They bask in their new lives together, that's what. They've experienced love, but that's finished. Now they must get on with things, continue to live life as if they've never met. But there's a telling expression on Maradona's face as he watches Salt Bae dish out the meat to his fellow diners. He's still got feelings for him. This one is going to take a while to get over.