Bruno Mars may be short but his reign on the top certainly isn't.

It's been over a year since Bruno Mars dropped his critically-acclaimed 24K Magic album and yet he's still dropping bombs from it in 2018. 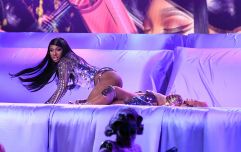 END_OF_DOCUMENT_TOKEN_TO_BE_REPLACED

Releasing a remix version of the song "Finesse", he's enlisted the help of Cardi B, a woman who, rightly so, can claim to be the current reigning queen of rap. Taking it back to the days of New Jack Swing with an obvious nod to the likes of Teddy Riley, Bobby Brown and Heavy D, the original version of the song was an immediate standout upon first listen to 24k Magic. This sentiment continues to be true, even more so thanks to the remix.

Once the internet discovered that Cardi was going to be featured on the track the reception was split. Some weren't looking forward to her guest spot claiming that she'd ruin the song, while others were looking forward to her inclusion as it seems she can't put a foot wrong at present - she recently tied The Beatles' record for her first three singles all placing in the Top 10 on Billboard. But the results are now in and it's unanimous, Cardi killed it!

Sitting in pocket and adhering to the theme and narrative set by Bruno, if anything it's fun. It's something you can play anywhere. With a Pharrell "Happy" type quality to it, if when listening to "Finesse" you're not doing the running man or any other 80s/90s dance move - and smiling while doing it - then quite frankly you have no soul, or perhaps you just don't have any desire to ever have fun. 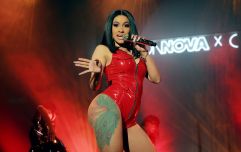 END_OF_DOCUMENT_TOKEN_TO_BE_REPLACED

Paying homage to the famous Wayans brothers 90s sketch comedy show, In Living Color, the video sets itself apart from anything else out right now. Authentically throwing itself back to the the golden era of Hip Hop culture, both Bruno and Cardi are decked out in fashion of the day - Cardi looking like something straight out of TLC's "Ain't 2 Proud 2 Beg" video - and it's all about the dance moves!

If only Bruno Mars could have got a couple of the original Fly Girls in the video, now that would have been special - surely Jennifer Lopez would have been up for a cameo if Halle Berry was willing to make a cameo on Bruno's album?

popular
Graduate sues University for £4m after 'slipping in puddle' at 2am
Amber Heard 'fought really hard' to appear in 'Aquaman 2' despite pared down role
NASA picture of Mars 'doorway' sparking bizarre conspiracy theories
Boris Johnson slams Jurgen Klopp for defending Liverpool fans booing national anthem
Liverpool fans were right to boo the national anthem
Amber Heard's lawyer becomes annoyed as Johnny Depp's team interrupts her testimony multiple times
ITV's The Chase star opens up on divorce from ex-wife who is his cousin
You may also like
Social Media
Viral TikTok shows clown dancing to WAP like an expert
Music
Graphic WAP sign language interpreter is better than the actual song
Music
QUIZ: How well do you remember the music of 2020?
Music
Biffy Clyro have covered WAP and it's even worse than you think
Music
Ben Shapiro reading Cardi B lyrics is the most awkward thing you'll see today
Next Page