Borat sequel hit with lawsuit before it's even been released

Are we even surprised by this news at all?

Sacha Baron Cohen is no stranger to controversy, and he has had his fair share of legal battles throughout his lengthy career.

And he has been hit with yet another lawsuit in the leadup to Borat 2 (also known as Borat Subsequent Moviefilm: Delivery of Prodigious Bribe to American Regime for Make Benefit Once Glorious Nation of Kazakhstan).

The estate of a Holocaust survivor has filed a lawsuit against the creators of Borat after the team allegedly informed her they were filming was for a documentary, not a comedy movie.

TMZ has reported the estate is demanding the scenes are removed from the film ahead of its release.


The estate said that Holocaust survivor Judith Dim Evans (who has since passed away) traveled to Atlanta with a friend to be interviewed by Cohen, and at no point was she told it was a comedy shoot. When she found out, she was reportedly "horrified and upset." 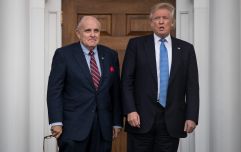 END_OF_DOCUMENT_TOKEN_TO_BE_REPLACED

It is alleged that producers told Evans that the movie was going to focus on Jewish culture.

Earlier reports from those close to the production of the movie stated that Sacha Baron Cohen had to wear a bulletproof vest for two days of shooting, and that his undercover filming put him in genuine danger.

The movie will be available to watch on Amazon Prime on 23 October.

You may also like
Film
Borat 2 review: Just as funny and shocking as ever
Film
Borat congratulates Donald Trump's debate performance in video message
Film
Borat tries to kill COVID with a frying pan in first sequel trailer
Film
Borat 2 is coming to Amazon next month, ahead of the US election
Film
The title of the secret Borat sequel has been leaked, and it is ridiculous
Next Page