Nothing has been confirmed yet...

Details have been thin on the ground regarding the return of Black Mirror, with constantly swirling rumours that the upcoming Christmas special of the show would star Miley Cyrus and would somehow be an interactive episode. 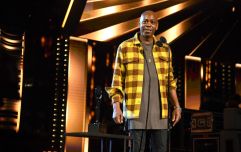 END_OF_DOCUMENT_TOKEN_TO_BE_REPLACED

All signs seem to point to an episode called 'Bandersnatch' dropping on December 28th, and eagle-eyed Netflix users have even spotted a placeholder in the back-end of the streaming service.

Now over on Reddit's r/BlackMirror, fans think they have cracked even more info.

They've found this post from the Korean Media Ratings Board:

Don't worry if you can't read Korean - the plot synopsis on there has been translated as:

A young programmer makes a fantasy novel into a game. Soon, reality and virtual world are mixed and start to create confusion.

This would definitely fit into the rumours of it being an 'interactive' episode - those classic text adventure games from the 1980s would be the perfect device if Charlie Brooker and co were trying to do some sort of TV equivalent of Choose Your Own Adventure.

END_OF_DOCUMENT_TOKEN_TO_BE_REPLACED

Another interesting bit of information from the Korean Media Ratings Board is that it says the episode is a whopping 312 minutes long!

That would be insane if it was true - but if indeed it is an interactive episode, this would make a lot of sense with all the various different pathways and options we guess that you can go down.

Either that, or there's a who new series of six episodes actually coming shortly.

Other unconfirmed details that have dribbled out other the last few months include this poster appearing on Twitter, which fits with retro adventure game theme.

Back in April, set photos also appeared to confirm the early 1980s setting.

Could someone nip into the #Croydon #BlackMirror 1984 WH Smith's & get me a couple of LP record boxes (blue), a turntable mounted record cleaning brush, a £10 record token & a copy of David Sylvian's 'Brilliant Trees' album (it's number 11 in the Chart racks)
thanks. pic.twitter.com/1P2OSCZVyf