A must-buy for fans of retro classics

While it is probably a massive oversimplification to say that without Atari, there would be no Nintendo, no Xbox and no PlayStation... Atari was definitely responsible for the first major explosion in the popularity of home gaming systems.

END_OF_DOCUMENT_TOKEN_TO_BE_REPLACED

Originally formed in 1972, the California-based company produced the likes of Pong and the Atari 2600, which were like the gaming equivalents of single-celled organisms that eventually evolved into the games and consoles we've got today.

To celebrate the company's 50th anniversary, they're releasing Atari 50: The Anniversary Collection, which will feature over 90 classic games, including releases from the Atari 2600 all the way up to the Atari Jaguar, which was still releasing games as late as 1996.

On top of the collection of well-known and hidden gem classics, the release will also feature six 'new' games, which are basically modern remakes of games like Yar’s Revenge, Quadratank, Haunted House and SwordQuest: AirWorld — all of which have been rebuilt from the ground up, a.k.a., the only kind of remasters we want to see. 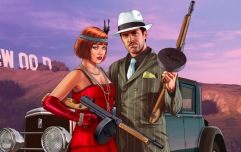 END_OF_DOCUMENT_TOKEN_TO_BE_REPLACED

These new versions are being worked on by Digital Eclipse, who have previously released some well-received remaster collections such as 2015's Mega Man Legacy Collection and 2018's Street Fighter 30th Anniversary Collection.

Atari 50: The Anniversary Celebration will be available in November 2022 for Atari VCS, PC, PS4, PS5, Nintendo Switch, Xbox One, and Xbox Series X|S.

popular
Moment Jake Paul ends up in dramatic fight with YouTuber in club
Landlord faces £40k fine after tenant puts swimming pool on roof of flats
Bulgarian mystic who correctly predicted Princess Diana’s death and 9/11 sees 2022 prophecy come true
Man United have 'decided to sell' promising midfielder James Garner
Graeme Souness 'doesn't regret a word' of 'man's game' comments that sparked sexism row
Graeme Souness under fire for calling football a ‘man’s game' while sat with Karen Carney
Incredible case of the only known individual whose parents were two different species
You may also like
Life
Gamer sells PC to pay for mum's cancer treatment
News
YouTuber claims that FIFA 23 is 'broken'
Sport
FIFA 23 fans in India able to buy the game for $0.06 after 'pricing error'
Entertainment
Game where you run around as a stray cat has become the highest-rated release of 2022
Entertainment
New open-world Black Panther game reportedly in the works
Next Page