"I don't know whether the UK is a bit pretentious for me, a bit too PC for me, where I can't be myself."

Ant Middleton has said that he is moving to Australia, and suggested that the UK was "too pretentious" for him. 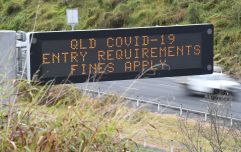 END_OF_DOCUMENT_TOKEN_TO_BE_REPLACED

The 40-year-old was sacked from his role on Channel 4's SAS: Who Dares Wins, with the broadcaster citing discussions around his "personal conduct," after allegations that eh had made "inappropriate comments" to women on set.

SInce then, Middleton has been filming the Australian version of the show, and has clearly decided that he likes it there, and is staying put.

Speaking to the Mirror, he said: "I feel like I fit in here.

"That's very strange being the person that I am. I don't know whether the UK is a bit pretentious for me, a bit too PC for me, where I can't be myself.

"I have to suppress a part of me to fit in, which I don't like doing and I won't do, as you've probably seen, but here you've got that balance that right."

He also told The James Smith Podcast that he felt that he had been treated unfairly by Channel 4.

Middleton said: "Witch hunt? I never thought that existed until the latest shenanigans with SAS UK.

"Ultimately people can see through it and know I was pushed before I could jump."

And he revealed that his family were keen for a move down under too.

"I've got a great connection with Australia," he continued. "My wife also loves Australia. She did a gap year out here when she was young. She's always said, 'Let's move to Australia.'

"So when SAS Australia came up, I was like, 'Let's see the layout, let's see how it goes.'

"We've sort of made a decision to move out here next year."

Last year wasn't a great one for Middleton. He labelled Black Lives Matter protests as "scum," and at the height of the UK's first lockdown boasted about how he was still living a normal life.

In a video posted in March 2020 he said: "Am I still out travelling the world? Yes. Am I still shaking hands? Yes. Am I still cuddling fans at the airport? Yes. Am I washing my hands and keeping my hygiene to a high standard as always? Yes."

After the latest series of his Channel 4 aired recently, Middleton posted on Instagram writing that he would always fight "against any political agenda forced into my work."

Watch out Australia, looks like you've got a certified legend heading your way.

So long Ant, you won't be missed.