'I don't feel I can accept this'

Ant McPartlin and Declan Donnelly won best presenter(s) at the National Television Awards for the 18th year in a row on Tuesday evening. 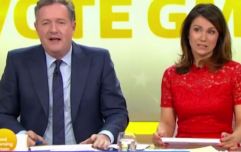 END_OF_DOCUMENT_TOKEN_TO_BE_REPLACED

Since they last collected their trophy, Ant has pled guilty to drink-driving and spent a period of time in rehab. He didn't present the Britain's Got Talent live shows and Holly Willoughby acted as a stand in during I'm A Celeb.

This time away from the cameras prompted Piers Morgan to boast he would quit TV for a year if McPartlin beat him to best presenter.

Ant and Dec joined the awards ceremony live from the Britain's Got Talent auditions. Ant said: "Wow thank you, this is a genuine shock especially this year. I’m shaking here, we want to say thank you.

"I really don’t feel like I can accept this award this year. The reason we have one is this guy. The best mate. I love you man. Well done."

As voted for by you, @AntAndDec have won the Best Presenter Award! And this one clearly means a lot.@OfficialNTAs #NTAs pic.twitter.com/yIJXThLMMm

Dec said: "Thank you to everybody who sent kind and thoughtful messages, they’ve kept me going while I’ve been flying the flag for the two of us but now we’re back together." 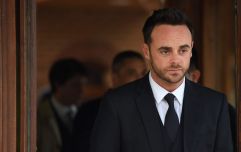 Ant McPartlin is returning to Britain's Got Talent tomorrow

END_OF_DOCUMENT_TOKEN_TO_BE_REPLACED

Host for the evening Dermot O'Leary had allegedly joked he would "throw in the towel" if Ant and Dec won the award again, so Donnelly also wished him a "happy retirement."

Ant McPartlin wasn't the only award winner to deliver an emotional speech on the night.

Danny Dyer won the award for best serial drama performance for his role as Mick Carter in the long-running BBC soap Eastenders.

He said: "I just want to say to all you young kids living out there in poverty, who don't think they've got a right to dream, or hope or believe - do not let where you come from define where you're going in life. You can be whoever you want to be.

"I want to dedicate this award to Harold Pinter, a man I loved very, very much and I miss him.

"He believed in me when no-one else did.

"I'm getting all fucking emotional, I don't know what's the matter with me, for fuck's sake."

popular
Noel Gallagher branded 'vile' by disability charity after Glastonbury comments
British schoolboy breaks internet after attending prom in sequined tuxedo ballgown
Teens are turning up to watch Minions in suits - and why cinemas have been forced to ban them
Dominic Raab may just have delivered the 'car crash interview of the year' over Chris Pincher scandal
Nick Kyrgios to appear in court after being charged with domestic abuse
A new £1 hangover prevention pill has gone on sale in the UK today
Cristiano Ronaldo 'upset' that he will now earn less than £400,000 a week
You may also like
Entertainment
Dec will be joined by a new co-host for I'm a Celebrity after Ant drops out
Entertainment
Ant McPartlin quits I'm a Celebrity
Entertainment
Ant McPartlin breaks Twitter silence following drink driving conviction
Entertainment
Ant McPartlin's return has been confirmed by ITV boss
Entertainment
Simon Cowell praises Declan Donnelly following Britain's Got Talent final
Next Page