All Elite Wrestling will have weekly TV show to rival WWE, on a major US network

Is Vince McMahon worried yet?

All Elite Wrestling, the upstart new wrestling promotion backed by billionaire Tony Khan, is set to have a weekly show on US network TNT.

Previous to this, AEW had only announced a series of one-off events and pay-per-views.

According to The Wrap, the deal between AEW and TNT is "virtually done". The announcement is set to made official at WarnerMedia’s upfront event this Wednesday, at Madison Square Garden in New York. The event is intended to pitch to potential media buyers, and AEW president Tony Khan and some of the wrestlers are expected to attend.

AEW's first pay-per-view, Double Or Nothing, takes place in Las Vegas on May 25th. The show will be headlined by Chris Jericho taking on Kenny Omega, and also feature The Young Bucks vs Pentagon and Fenix, and Cody against his IRL brother Dustin Rhodes, aka Goldust. Jim Ross is also signed on as commentator.

Earlier this week, it was announced ITV Box Office would be showing Double Or Nothing in the UK, with a preview show airing beforehand on ITV4. We'd therefore hazard a guess at the new weekly AEW show making its way to ITV4 at some point as well.

Rivalries will come to a head at @AEWrestling's #DoubleOrNothing PPV, live on @ITVBoxOffice Saturday 25th May. 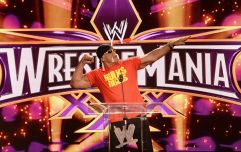 QUIZ: How many of these classic WWE wrestlers can you name?

END_OF_DOCUMENT_TOKEN_TO_BE_REPLACED

AEW was founded by former WWE star Cody, and indie tag team sensations The Young Bucks, at the star of this year. The company is backed by Tony Khan, who along with his father Shahid Khan, also owner Fulham FC and the Jacksonville Jaguars.

Last year, Cody and the Bucks put on All In, the biggest non-WWE wrestling show in decades.


popular
QUIZ: Fill in the missing club from these players' career paths - part 4
EA fined millions by Dutch court over FIFA Ultimate Team loot boxes
Borat fans raise $100,000 for woman tricked in new film
PlayStation and Xbox users will now be able to play against each other online
Krasnodar players criticised after only four take knee for Black Lives Matter
QUIZ: Match the Step Brothers quote to the character that said it
QUIZ: Can you guess the drink from its can?

You may also like
Film
Beyond The Mat remains the greatest wrestling documentary of all time
Fitness & Health
Planks are one of the worst ab exercises, says Triple H's personal trainer
Entertainment
The Rock hints that he might play in new American football league he bought
Football
The Undertaker sends a message to Leicester City over their new signing
Fitness & Health
Former WWE superstar The Boogeyman stills works out in his wrestling gear
Next Page