This is massive for wrestling fans in the UK

It has been announced that the first pay-per-view from All Elite Wrestling - the new upstart wrestling promotion backed by billionaire Tony Khan - will air on ITV Box Office in the UK.

Sky Sports has long been the home of American wrestling in the UK, with a partnership with WWE going back decades.

AEW Double Or Nothing takes place on Saturday, May 25th, and will be headlined by Chris Jericho taking on Kenny Omega.

"Fans across the UK can look forward to seeing all the drama, action and entertainment live from the MGM Grand Garden Arena in Las Vegas on the night of Saturday 25 May going into Sunday 26 May," says a statement on ITV's website. 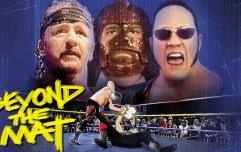 END_OF_DOCUMENT_TOKEN_TO_BE_REPLACED

"DOUBLE OR NOTHING, which sold out in under 30 minutes, features an electrifying card packed with stars including the headline clash between Kenny Omega and Chris Jericho. The wrestling world will rock as Cody takes on his brother Dustin Rhodes, The Young Bucks battle the Lucha Bros for the AAA World Tag Team Championship, Hangman Adam Page clashes with PAC, and Dr Britt Baker, Nyla Rose and Kylie Rae compete in a three-way match."

"Additionally, before the live pay-per-view event begins at 1:00 a.m GMT, Sunday, May 26, the hour-long live pre-show special "BUY-IN" will air for free on ITV4 at midnight."

All Elite Wrestling was launched by former WWE star Cody Rhodes and indie tag team the Young Buck, after securing backing from entrepreneurs Shahid Khan and his son Tony, who own both Fulham FC and the Jacksonville Jaguars.

You may also like
Sport
WWE legend Kamala has died aged 70
WWE
Former WWE star Marty Jannetty claims to have made a sex attacker 'disappear' in Facebook post
Entertainment
The Evolution of the Undertaker In WWE Video Games
Entertainment
Can a WWE wrestler and boxing champion learn from each other?
Entertainment
The Tory bad boy of professional wrestling
Next Page