Actress who played Megan refuses to take a side in the Drake vs. Josh feud

You can keep your Kardashian drama. All we want to hear about is what's going on between Drake and Josh.

The relationship between two of Nickelodeon's most beloved characters has seemingly soured in recent times and that came to light when Drake Bell, the actor who played Drake, revealed that he'd not been invited to the wedding of his former co-star Josh Peck, who played... you know who he played.

END_OF_DOCUMENT_TOKEN_TO_BE_REPLACED

90s kids were left heartbroken by the news that there might be some beef between the pair, whose chemistry was so good on The Amanda Show that it earned them a show of their very own.

Drake & Josh was on the air for three years, four seasons and 57 episodes of what our childish brains perceived as comedy gold.

Still not over it https://t.co/Mzxs2x9myi

Some conspiracy theories did the rounds on social media suggesting that Drake perhaps was invited to the nuptials but the invitation was intercepted by none other than Megan. 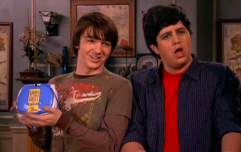 END_OF_DOCUMENT_TOKEN_TO_BE_REPLACED

Megan was Drake's younger sister in the show and regularly interfered in the lives of both title characters.

So who else but the actress who played her, Miranda Cosgrove, to weigh in on the feud.

Well, unfortunately, Cosgrove seemingly didn't take a side as she was presented with a question about the apparent rift between Josh and Drake (feels wrong putting them in that order).

"I don't know. I'm just happy for Josh," Cosgrove told Entertainment Tonight. "I hope he has a good marriage. It's exciting. 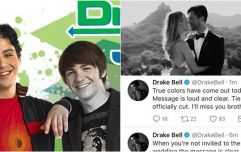 END_OF_DOCUMENT_TOKEN_TO_BE_REPLACED

"It's just crazy that so much time's passed. So many of my friends who were on Nickelodeon with me are getting married now."

And while Cosgrove sat on the fence in the argument, perhaps we can read between the lines that she's slightly leaning towards Drake because, after admitting she wasn't invited to Josh's wedding either, she revealed that she'll be attending Drake's upcoming birthday party.

"I really only see them once in a while," Cosgrove added. "I'm going to Drake's birthday in a few days."

Don't you dare sit there and say that this story doesn't have legs!

popular
Motorcyclist dies in crash live on TV while trying to escape police
Millions could get one-off cash payment to ease cost of living crisis
The JOE Friday Pub Quiz: Week 278
What Meat Loaf actually meant when he sang 'I won't do that'
AFTV regular 'Mr DT' releases statement after being given three-year jail sentence
Brit doctor visiting US killed by stray bullet while lying in bed
Daniil Medvedev booed mercilessly by Australian Open crowd during honest interview
You may also like
News
Drake & Josh actor Drake Bell charged with crimes against a child
Entertainment
Outrage as government announces end to BBC licence fee
Entertainment
James Buckley rules out any chance of an Inbetweeners return
Entertainment
Ricky Gervais: I have to offend even if people don't like it
Entertainment
Scream 5: Why do so many people want to f**k Ghostface?
Next Page