First of all, a big thank you to Twitter user Charlie Bruce for drawing our attention to this, quite possibly the worst scene in the history of television. Without his tireless work in the field, literally just sat on his arse watching Emmerdale in his own free time like the maverick that he is, I wouldn't have had to write this ridiculous 2,000-word article deconstructing a scene from this ridiculous never-ending soap opera about farmers. People who farm.

Shoutout to @emmerdale for single handedly the worst piece of acting I’ve ever seen! I’m in bits 🤣🤣🤣 pic.twitter.com/D42WgDoKBM

Third of all, and please do consider this before we begin along with the already established points i) and ii), this might not even be the worst scene in the show's history. Given that our source for this masterpiece was a guy who doesn't know what 1999 was like ((the year, not the Prince song) actually also the Prince song, that still works), and given the sheer, impossible steaming mound of Emmerdale that actually exists, a relentless backlog of it, endless storylines and narratives about farmers and people farming and farms but also the very essence of human relationships themselves, then it is not impossible that this is not the worst Emmerdale scene ever.

In fact, given the above, logic dictates that - just like the possibility of extraterrestrial life, the probability that we aren't, in fact, alone in the universe - it is actually likely that this, quite clearly one of the worst scenes of television ever produced, isn't even the worst Emmerdale scene. It is likely that there's an even worse scene out there somewhere, hidden deep within the infinite Emmerdale turd.

A truly horrifying thought and one I'd like you to keep in mind through the rest of this journey. Yes, yes it is a journey. Fuck off. It is. It's a journey.

CONTEXT OF THE SCENE

All images courtesy of ITV hub. Clearly. Like quite fucking clearly. Why are you still reading this caption? You're wasting your time. Think how much time you have just waited. I have literally just stolen time off you, you idiot, and you're not getting it back.

As someone who has never watched any soap other than Hollyoaks, a show I had a fairly tumultuous relationship with for a couple of years back when it came on in that eternal purgatory after The Simpsons and before tea, I am not going to start now. Which is why I have fast-forwarded straight to the start of the scene in question without any knowledge of who the characters are, their motives, storylines or indeed, why they are in that bit of the park you and your friends used to go to after school to share a Red Bull and chuck sticks at each other and see who could do the most pull-ups on the branch of a tree, all whilst blasting Collision Course out of a Siemens.


You'll have to dive in with me at this particular entry point: a woman in a coat and heels but also with a sleeping mask on her head getting chased through the woods by a shadow demon.

Of course, she falls over. What does she trip over? Some leaves. She trips over some leaves. Oh look, it's not a shadow demon at all, it's something even worse, even more evil, a middle-aged man in a khaki jacket and bootcuts.

THE BIT THAT LOOKS LIKE IT'S GOING TO GET A BIT FUCKING DARK, MATE.

Uh oh. Khaki bootcuts has gone straight for the pin of Denise's arm. Rather than attack him with her currently free, unrestrained hand, however, she instead decides to gently wave it around.

LOTS OF SCREAMING AND WAILING


He's called Liam. Of course he fucking is. How could he be called anything else other than 'Liam'.

"Don't do what?" he says, literally pinning down a woman in the middle of the woods. Oh, don't do the fucking medium sudoku in the paper this evening please, I started it this morning and was saving to finish before bed tonight. That's all xox

This is Liam's face after the woman he is pressing to the soil, physically forcing into the mud, pleads not to kill her. If this face was a noise it would be 'WADDDDYYYYYUH?'

The most cretinously stupid noise you've ever heard, basically.

If you ever find yourself held to the cold, moist earth by a man called Liam, particularly one wearing a khaki jacket and bootcuts, particularly one having some kind of existential crisis because he's confused that a woman he is aggressively constraining on the floor is scared of him, do follow Denise's self-defence technique of screeching at a pitch and frequency unique to semi-balding Yorkshire farmers.

Because then this will happen. 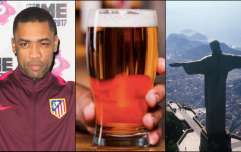 END_OF_DOCUMENT_TOKEN_TO_BE_REPLACED

Let's just... let's just take a few moments to really appreciate the mise en scène here. This shot honestly wouldn't look out of place in Terrence Malick's Tree of Life. Apart from the massive blur in the exact centre of the shot, which is a large Northerner flying through the air with his arms outstretched like he's bouncing on the trampoline he bought to shut his kids up but now secretly goes on sometimes when nobody is in, it wouldn't look out of place at all in Terrence Malick's Tree of Life.

Just take it in, soak it in, swill it like an aged wine, the subtle majesty of this shot. Note the splaying of the fingers of his hands like a Dales Spider-Man, ready to enclose upon whatever unfortunate object happens to break this hefty air-to-surface missile's landing. Note the angle of the shot, how it is framed upwards, towards the loose canopy of the trees with daylight breaking through onto object, simply so you cannot tell how high this... thing, is. 10cm. 10 metres. 100 feet.

It is impossible to tell. This airborne assassin could be dropping from the very top of the Amazon rainforest itself. If it wasn't quite clearly being filmed 'round the back of a children's play area, that unkempt cluster of trees in the local park where teenagers go to smoke and drink Dark Fruits, that is.

And finally, note the belly. Note the way his jacket rides up his stomach to his chest to reveal that immaculately sculpted Dad bod, the greatest weapon a large Yorkshireman can have when dropping from small, almost imperceptible height onto his foes. Whatever else you may take away from this analysis, please do know that I genuinely and earnestly believe this shot belongs in the cinematic canon.

Just two men sharing a tight, emotional spoon, embracing each other amidst the warm caress of nature.


NO, WAIT, PAIN: A STUDY THEREOF

Never mind. Cancel that. They're fighting again. ^ This bit, by the way, is wonderful. Look at how far away he actually is from the arm when he pretends to bite him! Hahahahahahahahaha.

THE GHOST LEG... HIS LEG IS A GHOST

And once again, that sweet, sweet portion of Dad Bod between the top of the belt and the bottom of the ambitiously sized jacket gets another look in. Glorious.

HE'S BALANCING ON ONE LEG BECAUSE HE DOESN'T WANT TO PUT HIS SOCK ON SOME LEAVES HAHAHAHAHAHAHA JUST PLANT YOUR FOOT YOU ABSOLUTE WEAPON.

(Please do also note the shoe, that blur to the left of the frame, and again the distance between it and Liam's Muhammad Ali evasion)


Part 1 details the emotional agony felt by the subject, the brutal ebb and flow of his mind as he slowly comes to terms with the prospect of losing the second to last lump of nourishment he has stored on his person.

Part 2 is all about clarity of thought, the searing, painful acceptance of what needs to be done, and knowing that it won't be easy. Make sure to take into consideration the two women, one of whom he has just saved from the clutches of a man called Liam, who are huddled together in total fear. They almost cannot bear to look at the violence about to take place.

Part 3 is entitled, simply, 'And then he does it'. He lobs the pork pie. In movements so quick as to be barely perceptible to the human eye, and indeed, to the state of the art Emmerdale cameras, he lobs the pork pie. He lobs it with such force and ferocity that the whole frame is covered in this kind of desert heatwave blur of energy. And then...

Right on the money. Show this still to any person in the entire world who hasn't watched this scene and ask them "What has just happened here?". "What has just gone on to lead to this person to look like this, with this expression, and hold his hands out like this, a pseudo-jazz hands style flourish?" Will anybody, anybody in the entire world give the correct answer: "Nailed in the forehead by a pork pie hurled at 400mph".

No, no they won't. Not a single soul out of the roughly 7.5 billion alive today. And therein lies the beauty.

This is my favourite bit. This cut to the woman possessed by an evil spirit who just says "YES!". It really adds something. I have no fucking idea what, mind. But it definitely does.

This is it: the face of a man who wasn't prepared for the consequences of his actions. The face of a man who will now spend the rest of his days haunted by the image of his victim, stricken down by a lump of jellied pork stock encased in pastry, hurled at a fatal velocity.

This image, basically. Every time he closes his fucking eyes. Etched on the inside of his eyelids.

SHE'S NOT CALLED DENISE. SOMEHOW SHE IS CALLED BERNICE. EASY MISTAKE TO MAKE TO BE FAIR. BERNICE IS DEFINITELY DEFINITELY A REAL NORMAL NAME THAT PEOPLE HAVE. THANK YOU AND GOODNIGHT.