Absolute Legend is the obvious frontrunner.

In case you're not aware, Chrissy Teigen and John Legend are expecting a baby. It could be a velociraptor but the expectation is that it will be a real human baby. I guess we'll see what happens. 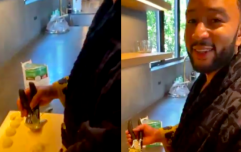 END_OF_DOCUMENT_TOKEN_TO_BE_REPLACED

Having failed lovers of banter everywhere by declining to give their firstborn a cool name that fits with Legend (they picked Luna), the pressure is on for this delightful couple to deliver us some comedy gold.

As a disclaimer, I must admit that I've got a mild obsession with concocting fantasy names for celebrity offspring. For example:

If Janet Jackson doesn't call her new baby 'Imsorrymiss' then what is the actual point.

So at this point it should become abundantly clear that I have very little going on in my life other than fantasising about the ultimate celebrity baby name.

With that in mind, I'd like to give John and Chrissy some options for their impending arrival.

(For the benefit of this piece actually working, we need to pretend that Legend is John Legend's real surname and will therefore be the baby's surname as well. Thank you for your patience).

John and Chrissy could cultivate the world's coolest cartographer by naming their baby Map Legend. He/she would be able to identify every symbol on a map with great ease, as the name suggests. Also, the classic Knock Knock retort 'look at map' could be the first joke that he/she learns. Adorable.

This name applies a large amount of pressure on the kid, but with parents like John Legend and Chrissy Teigen, he/she should live up to it just fine. Of course, the baby will need to be a purveyor of the Absolute Legend Lifestyle from birth, so must be able to neck a bottle of milk in four seconds and laugh at old people (anyone over 35) without remorse.

The baby will be rumoured to exist, but nobody will be fully sure that it does. Chrissy will need to give birth to Urban in total secrecy and conceal the child until it turns 18, at which point it will graduate from being an Urban Legend to a Verified Legend. Urban Legend can also be nicknamed Mary J. Blige, the queen of urban music.

John Legend has produced some incredible music throughout the course of his life, but 'All Of Me' is probably his most recognised hit. Would it be incredibly indulgent of him to name his baby after his own song? Yes. But would it be absolutely fucking hysterical? Again, yes.

The 2007 post-apocalyptic science fiction horror movie boasts a 69% score on Rotten Tomatoes (nice) and is credited with giving Willow Smith her first taste of stardom playing the role of Dr. Robert Neville (Will Smith)'s daughter. John and Chrissy have been to the Oscars, they've seen movies. Therefore, this makes sense.

This reliable Japanese car name could set the baby up for a lifetime of popularity among race car drivers. That might not seem like an appealing trait to have, but race car driver friends are very precious ones to have. They can give you a lift at a very quick but safe pace and will offload some of their sponsorship merch to you as well. That baby will never go without a lift or NASCAR jacket if they choose this hysterical name.

This one is an upgrade from the aforementioned 'Absolute Legend' suggestion, mostly by removing any doubt whatsoever regarding whether the baby is a legend or not. The expletive isn't ideal, but it's the only way to get the point across. It can be rejigged to Total F**king Legend on important documents, but at school this kid is going to be so fucking popular when the teacher does roll call.

Sometimes, in the ultimate act of narcissism, Dads name their children after themselves. This name suggestion relies heavily on the baby being a boy, but they could still make it work even if it's a girl. Is the world ready for two John Legends? Probably. The one that we have now seems like a very nice man.

No real logic here, just think it'd be funny to call the baby after McDonald's prime offering for those that favour chicken over questionable beef. In later life, if McChicken Legend wants to wed, they should settle down with someone whose surname is No Mayo, to have the ultimate name: McChicken Legend-No Mayo.