It's a jungle out there, especially when you're a contestant on I'm A Celeb. 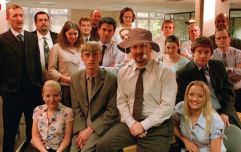 END_OF_DOCUMENT_TOKEN_TO_BE_REPLACED

Last night's episode saw the celebrities settling into their new lives as prime targets of some very poisonous Australian snakes and spiders.

Emily took part in the first Bushtucker trial, which saw her surrounded by snakes and gave her a glimpse of what life would be like if she ever turned her efforts towards British politics.

Fleur and Anne dressed up as gnomes for some reason, which had no influence over their success of collecting the precious jungle treat tokens because Roxy and The Vamps absolutely fucked the trivia question and they all went hungry.

It was a funny episode, here's some key moments you might've missed.

Dec was highlighting the absurd time that the celebrities woke up the previous morning (4.50am) and to hammer home the point, queried what kind of person would ever get up at such an ungodly hour. He teed everything up perfectly for Holly, who responded with "Well you would if there was a sale at Baby Gap", which was funny because Dec is small and therefore wears small clothes. Do you get it? Like he would queue up outside the shop before the sale starts so that he could get discounted clothing items for his tiny little body. Anyway, Holly Willoughby is a comedian now. Her tour starts in the spring and she'll be at Edinburgh Fringe as well. Book tickets early to avoid disappointment.

2. Harry Redknapp revealed that his wife calls him "Mr. Pastry"

But why? Is it because he's easier to work with once he's been put in the freezer for a little while? Delicious with both sweet and savoury treats? A key component in a good beef wellington? Available from all good supermarkets? No. He's just quite clumsy, actually. Harry launched into a standup routine where he reenacted a situation that involved trying to water the plants at home using a power washer, accidentally destroying all plant life their garden once had. It was good observational material. With that, we now have another emerging comedic talent in the jungle this year. Harry will tour with Holly Willoughby in the spring. Again, book tickets early to avoid disappointment.

3. Holly and Dec saw your nudes

Not sure how they managed to get into your iCloud during last night's I'm A Celeb, but their pained expressions seen above can certainly attest to the allegations that they have seen your nudes. Professional as they may seem, the pair aren't above curiosity. They wanted to see how you'd managed to incorporate a pair of oven mitts into your nude poses and they had every right to find out. As you can tell, neither were hugely impressed with what they saw, also they'd like you to stop watching the show as it's distracting them to know that your soft, shitty body is observing their craft. Many thanks. Apply aloe vera liberally to that burn.

4. Not for the first time in her career, Emily had something gross and slimy clambering all over her

Because she plays Charlotte Hinchcliffe on The Inbetweeners! And there was a load of gross slimy water creatures crawling all over her during the Bushtucker trial! And Will tried to sleep with her but was logistically unable to! It's a good joke and I am happy to announce that I will be joining both Holly Willoughby and Harry Redknapp on their spring comedy tour, hitting up all major cities and towns across Great Britain and Northern Ireland. Book early to avoid disappointment.

5. Fleur East might be 31 years old and an accomplished singer, songwriter, rapper, dancer and fitness model, but she still finds farts funny

James and Fleur were having a walk through the jungle, embracing the fruits of mother nature and all that she does for this blessed earth, when Roxy from EastEnders let a massive one rip, so aggressive that it echoed throughout the vast expanse of the jungle. Rather than pretending not to hear it, thereby allowing the woman to have some dignity about her basic bodily functions, James and more so Fleur burst into laughter, just about rupturing their respective spleens in the process. Finally, ironclad evidence that celebrities are just like you and I, they find farts deeply funny on a level that is inexplicably hilarious regardless of age or gender.

6. Anne Hegerty gave an accurate representation of what it's like to be a human being in the year of our Lord 2018

Sometimes everything just gets to be a bit much and you need a quick sit down. Anne somehow managed to find a chair in the middle of the Australian jungle, which proves that if you dare to dream, you certainly can achieve. She left Fleur East, a woman she described as being "like a Duracell bunny" off to her own devices with the task, while she sat down and composed herself for a moment. In these uncertain political and economic times, the world would be a far better place if we all just sat down for a minute and gathered ourselves, while we let Fleur East quite literally do all the heavy lifting. She's a fitness model, she enjoys it.

7. The argument for remaining inside the EU was finally put to rest

$100 for some scones with jam and cream! $100 for whatever the heck crudités are, with hummus! This is an absurdity. This is what happens when you're outside the EU. It's a literal jungle out there. Freddos cost five times what they are in the UK, you have to pay to use public toilets, Capri Suns don't even come with straws over there, they just pierce the pouches with the teeth and then pour the liquid in their bare hands for consumption. Brexit must be stopped before it's too late. Britain is not safe, the country is in very real danger of descending into turmoil. There might be a shortage of scones, ffs!

8. John, Nick and Malique gave an accurate representation of a typical car journey across the UK

The three types of people during every car journey #ImACeleb pic.twitter.com/FsL4tWvU2U

Think about every long distance car journey you've ever been in. Whether it was with family, friends, colleagues or strangers, there's always a very typical set of people you're going to encounter. The first is a lot, he/she wants to be heard for the entirety of the drive, whether that's through singing, talking or even dancing. The second is amused by everything, he/she cannot contain their giddiness for a moment, nor do they want to. The third, from start to finish, wants to die. He/she hates everyone and everything and cannot wait to arrive at the destination where they will no longer be under the very real threat of committing several murders. Many thanks to John Barrowman, Nick Knowles and Malique Thompson-Dwyer for reenacting this scene.