Following England's heartwrenching defeat at the hands of Italy on Sunday, numerous players, including Bukayo Saka, Marcus Rashford, and Jadon Sancho, were all subjects of racial abuse online. Prince William, Priti Patel, and Boris Johnson were among the figures who criticised the racist, though their comments at this time are just comments, not action. One such racist who could not escape the wrath of Twitter was an estate agent from Savills.

"Savills is committed to eliminating discrimination and encouraging diversity amongst our workforce. A full investigation will be carried out in regards to this unacceptable incident," they posted to Twitter.

"Savills abhors and has zero-tolerance to any form of racism and racial discrimination and is appalled by the racist comments in these tweets. Savills is immediately investigating and will take appropriate action."

The man later claimed his phone was hacked, and the police had been contacted on the matter.

"Savills has acted swiftly and confirms that the individual is suspended from duty pending the findings of this investigation, which is being progressed as a priority."

Interesting that, when my friends' accounts get hacked, they normally post ads for 90% off Ray-Bans. Not racist abuse directed at footballers.

Twitter itself has responded to the incidents caused by the Euros over the weekend: 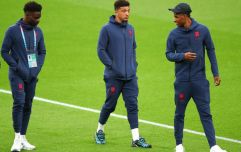 END_OF_DOCUMENT_TOKEN_TO_BE_REPLACED

"The abhorrent racist abuse directed at England players last night has absolutely no place on Twitter.

"In the past 24 hours, through a combination of machine-learning-based automation and human review, we have swiftly removed over 1,000 Tweets and permanently suspended a number of accounts for violating our rules – the vast majority of which we detected ourselves proactively using technology.

"We will continue to take action when we identify any Tweets or accounts that violate our policies.

"We have proactively engaged and continue to collaborate with our partners across the football community to identify ways to tackle this issue collectively and will continue to play our part in curbing this unacceptable behaviour – both online and offline."