END_OF_DOCUMENT_TOKEN_TO_BE_REPLACED

Appearing on Joe Rogan's podcast on December 31, Dr Robert Malone said mass psychosis has caused a "third of the population basically being hypnotized".

However, GOP Representative Troy Nehls has entered a full transcript of the podcast into the congressional record.

Malone believes that said "psychosis" is why people take advice from experts and get vaccinated.

WHO confirms two new Omicron sub-variants are under investigation

END_OF_DOCUMENT_TOKEN_TO_BE_REPLACED

He said: "When you have a society that has become decoupled from each other and has free-floating anxiety in a sense that things don't make sense, we can't understand it, and then their attention gets focused by a leader or a series of events on one small point, just like hypnosis, they literally become hypnotized and can be led anywhere."

Predictably, Malone also made the comparison between the handling of the pandemic and Nazi Germany.

But here's the kicker. Psychology Experts have said there is no actual support for the doctor's claims. They added that "mass formation psychosis" is not even in the American Psychological Association's Dictionary of Psychology.

"To my knowledge, there's no evidence whatsoever for this concept," Jay Van Bavel of New York University told the AP. Numerous other psychology experts agreed with Van Bavel, with the UK's John Drury stating that: "No respectable psychologist agrees with these ideas now". 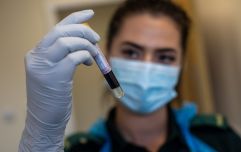 END_OF_DOCUMENT_TOKEN_TO_BE_REPLACED

PolitiFact acknowledges that politicians have been pumping out ant-vaxx rhetoric but stated they are more concerned with Malone.

"He's a legitimate scientist, or at least was until he started to make these false claims," Dr. Paul Offit, chair of vaccinology at the University of Pennsylvania's Perelman School of Medicine, told PolitiFact.

popular
Jordan Peterson suspended from Twitter over Elliot Page comment - says he won't apologise
Brits to bake through four-week scorcher with highs of up to 35C predicted
Nick Kyrgios tells reporter 'I do what I want' after defying Wimbledon dress code
Premier League player arrested on suspicion of rape
Wildlife trophy hunter who killed lions and elephants gunned down in 'execution-style' murder next to car
Swiss football fan slept rough in Milan for 10 years after getting lost at San Siro
Moment fighter jet appears at the wing of easyJet flight after teen passenger ‘made bomb threat’
You may also like
News
Scientist warn that climate change will drive new transmission of 4,000 viruses between mammals by 2070
News
Outrage after corgi beaten to death with spade by covid worker in China
News
Covid case rates hit highest ever level in England, influential study finds
Life
Man hiding true identity for years outed by his covid vaccine
Life
Covid brain can cause brain to shrink, new study finds
Next Page