The comedian finding humour in his dad's murder

"An argument ensued, and he ended up strangling my dad then setting him on fire"

In 2011, the father of comedian Chris McGlade was brutally murdered. 77 year-old Terry McGlade was strangled by his friend Malcolm Harland, following an argument. Harland then tried to cover his tracks by setting fire to his victim's bungalow. 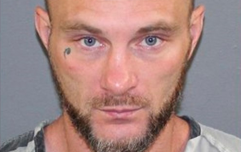 Wanted man 'snitches on himself' with vital detail on neck tattoo

END_OF_DOCUMENT_TOKEN_TO_BE_REPLACED

It is one of the most horrible things you can imagine anyone having to go through. But Chris McGlade, who has been a stand-up for over 25 years, has made his father's life and death the focus of his new comedy show 'Forgiveness'.

Ahead of the show's run at the Leicester Square Theatre at the end of February, Chris spoke to us openly about finding jokes in even the darkest things in life, and how his father's sense of humour inspires his comedy.

"An argument ensued, and he ended up strangling my dad then setting him on fire."

Comedian @christophermcg8 explains why he decided to write a comedy show about his father's murder. pic.twitter.com/ORwrTSbLEj