FIFA 17 will be released in a matter of days.

You probably already knew that. If not, we've no idea where you've been for the last few weeks. 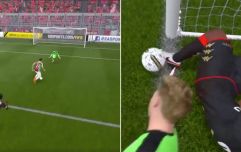 END_OF_DOCUMENT_TOKEN_TO_BE_REPLACED

We've been providing you with regular updates about the new game's many new features, one of which being the its all new story mode - The Journey - which we had the chance to play for a bit a few weeks back.

If you're not familiar, the gist of it is that players are able to take charge of a young footballer named Alex Hunter, guiding him through his professional career. Although you can opt to play as the fictional footballer with any team, lots of the promotional stuff for the new game has shown Hunter as Manchester United's number 29.

With precisely a week to go before the game's UK launch, its latest advert also appears to show Hunter (although it doesn't show his name) in a United shirt.

Beginning in the tunnel ahead of a meeting with Real Madrid, the #29 follows Anthony Martial on to the pitch. After that, there's a good minute's worth of footage showing him coming up against a number of high profile English and European teams, before closing with the message 'Make Your Mark'. 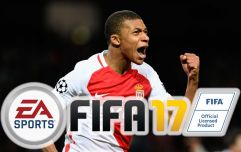 END_OF_DOCUMENT_TOKEN_TO_BE_REPLACED

Admittedly, we've got no idea why we get a glimpse of Eden Hazard and Marco Reus as pitch-side pundits, or what the hell those Manchester United fans are singing, but the advert still does enough to get us a little bit more excited about the new game.

popular
Chilling moment man with knife and balaclava is captured wandering around family's living room
Kathy Hilton slammed after mistaking Lizzo for Precious
Landlord faces £40k fine after tenant puts swimming pool on roof of flats
Lisa Kudrow hits back at fans complaining about lack of diversity in Friends
James May 'hospitalised after crashing into wall at 75mph filming new show'
Ex-porn star Lisa Ann tells virgin, 46, with micro penis that 'size doesn't matter'
The Game reignites Eminem feud by commenting on Hailie's social media pictures
You may also like
Entertainment
QUIZ: Can you guess the FIFA game from the songs on the soundtrack?
Entertainment
It looks like people are so over Ed Sheeran's new album
Sport
Newcastle United flop is now one of the top rated players in Ligue 1 on FIFA 17
Sport
Romelu Lukaku's bothered-not-bothered reaction to not being upgraded on FIFA is great
Sport
FIFA 17 Ratings Refresh sees Liverpool and Everton men among the biggest climbers
Next Page