So here we are again

Ronaldo or Messi. Messi or Ronaldo. It's the question that echoes around every playground, every live stream chat window, in fact, probably in the Facebook comment section of this article, at this very moment, grown men are limbering up their fingers to go once more unto the breach and answer the question: who is football's greatest? 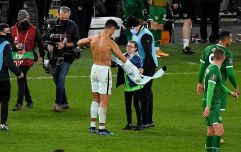 END_OF_DOCUMENT_TOKEN_TO_BE_REPLACED

Ronaldo himself is dead into it. "I'm the best player in history, in the good moments and the bad ones. I respect everyone's preferences, but I've never seen anyone better than me," he said after winning the Ballon d'Or back in December.

But it seems that Messi, unlike his Portuguese rival is not.

In a recent interview with Tyc Sports he was asked the question and his response sums up the difference between the two men.

"I'm not interested in being the best in history," he said, via Goal. "I have never suggested that: not being the first, nor the second, third or fourth. 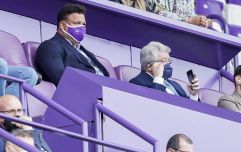 END_OF_DOCUMENT_TOKEN_TO_BE_REPLACED

"Every time I start a season I try to improve myself, win everything, leave everything every time I go out to the pitch, give the maximum for my teammates and for myself."

Messi the master of Camp Nou, the perpetual schoolboy, the human sand-timer slowly running out - he does his talking on the pitch.

popular
The JOE Friday Pub Quiz: Week 295
Eddie Hall necked vodka, pills and s**t the bed night before winning World's Strongest Man
Burnley and Leeds write to Premier League over concerns about Everton breaching financial rules
Johnny Depp goes into character after fan shouts he’ll aways be her captain Jack Sparrow
Johnny Depp's ex-girlfriend claims he 'threw a wine bottle' at her during hotel room fight
Fan footage emerges from the moment Patrick Vieira 'kicked' Everton supporter
Snake Island ‘f*** you Russian warship’ stamps are selling for up to £8,000 on eBay
You may also like
Football
Heineken will no longer appear in front of Muslim players after Pogba causes rule change
Sport
Neymar dedicates celebration to Ronaldo after landmark goal
Sport
O Fenômeno: The story of Ronaldo's brief but brilliant whirlwind at Barcelona
Sport
Cristiano Ronaldo played key role in Higuain's penalty miss against Juventus
Sport
Ronaldo's United debut 'like first page of a book you know is going to be a classic'
Next Page