"This was a genuinely innocent moment, which appeared to be something completely different when captured on camera."

Crystal Palace's Wayne Hennessey has been cleared of making a Nazi salute, the Football Association have announced. 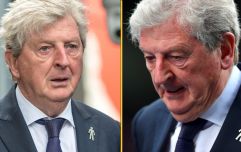 END_OF_DOCUMENT_TOKEN_TO_BE_REPLACED

The goalkeeper was charged by the FA in January after an image - which appeared on the Instagram account of his German teammate, Max Meyer - allegedly showed him making the offensive gesture during a meal with the Palace team.

Hennessey categorically denied the claims at the time, insisting on Twitter he had 'waved and shouted at the person taking the picture to get on with it' and 'put my hand over my mouth to make the sound carry'.

Now, as highlighted by a statement from his club, the charge has been dismissed by an Independent Regulatory Commission following a hearing.

"I’m delighted that the FA have found me not guilty of this charge," the Welsh international said following the hearing. "This was a genuinely innocent moment, which appeared to be something completely different when captured on camera.

"I want to state for the record that I abhor all forms of racism, fascism, anti-semitism or discrimination of any kind."

Roy Hodgson, his manager at Palace, said: "I believe Wayne and his people were there eight hours yesterday putting their case forward. I'm very happy with the outcome because I always believed him to be innocent."

popular
Cops ignored call-outs to have sex in their police car while on duty
UK company adopts four-day work week so employees can focus on themselves
Mum takes over school board meeting with bizarre anal sex rant
Jeremy Clarkson 'worried' about Kaleb Cooper's future
'My parents secretly did a DNA test on my baby because they didn't trust my wife'
Mum paralysed by stroke after M25 protest delayed trip to hospital by six hours
Emmy Awards hit with criticism after all major acting awards go to white actors
You may also like
Sport
Wilfried Zaha becomes first Premier League player to vow to stop taking a knee
Sport
Crystal Palace ultras pen open letter to players and manager
Sport
Crystal Palace issue statement on Eberechi Eze's visit to watch former club
Sport
All the goals: Eze and Saka shine as Palace and Arsenal pick up important wins
Sport
Roy Hodgson breaks silence on Luka Milivojević's Covid-19 breach
Next Page