Be warned, kids: pitch invasions can get you into bother.

If caught, you could find yourself with a ban from some football grounds or even getting arrested. We wouldn't recommend you do it... even if you manage to look as fucking cool as the guy that grabbed the corner flag in the seconds after Sheffield United's promotion to the Championship was confirmed this weekend. 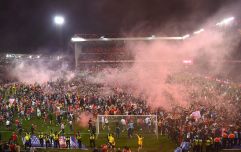 END_OF_DOCUMENT_TOKEN_TO_BE_REPLACED

After a six-year absence from the second tier of English football, the Blades sealed their promotion on Saturday thanks to a 2-1 win at Northampton. United had known they'd clinch a spot in the Championship with a win, although third-placed Fleetwood's loss at Oldham meant that they were destined to go up on Saturday no matter how things panned out at Sixfields.

At full-time, a number of supporters spilled out of the away end and on to the pitch. As pointed out by the tweet below, none of them were quite as noticeable as the bloke that snatched up one of the corner flags before charging triumphantly through the middle of the frame with it held proudly above his head.

United sit nine points ahead of Bolton Wanderers and can clinch the League One title if they manage to take four points from their remaining four games this season.