If you've been detained by police on allegations of drink-driving and been stripped of the captaincy of your football club as a result, you might want to lay low for a bit.

What isn't the best of ideas is to respond with a celebration playing on what are very serious allegations.

END_OF_DOCUMENT_TOKEN_TO_BE_REPLACED

But none of that went through David Limbersky's head when he found the net for Viktoria Plzen in their league game against Pribram.

Limbersky, a Czech Republic international, lost the captaincy after allegedly crashing his car while over the legal limit for alcohol. But when he scored just days later, this was how he marked the occasion...

Plzen described Limbersky's alleged drink-driving as 'A totally unacceptable breach of professional contract for which there is simply no mitigating circumstance.'

Following the controversial celebration, the club publicly distanced itself from the player's actions and issued another statement explaining: "Although the club is able to understand that the events of recent days have been emotional, David Limbersky's gesture could be construed as disrespecting or making light of the situation." 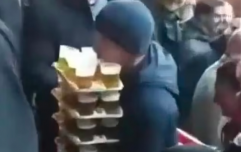 END_OF_DOCUMENT_TOKEN_TO_BE_REPLACED

The defender, who had a short loan spell with Tottenham Hotspur earlier in his career, is not the first footballer to embark on a contentious celebration following off-field controversy.

After infamously hitting team-mate John Arne Riise with a golf club, former Liverpool striker Craig Bellamy made fun of the issue when he scored for the club against Barcelona.

popular
Patrick Vieira appears to kick fan after Everton defeat
Man United cancel end of season awards after player requests
Johnny Depp's lawyer Camille Vasquez responds to romance rumours
Amber Heard's acting coach explains exactly why she believes her tears are real
Rangers fan missing in Seville without phone or money as family appeal for help
Amber Heard told Johnny Depp to 'suck my d*ck' in secretly recorded audio
A definitive ranking of every swear word from worst to best
You may also like
Life
Guys in search of ‘quiet pint’ end up on 4am flight to Ibiza
News
Pints are about to get even more expensive due to increasing production costs
Life
One of UK’s biggest pub chains hikes price of pint by 45p
Life
UK pint prices could soar to £10.50 if inflation continues at current rate
Life
Drunk woman sparks police chase after getting on motorised suitcase
Next Page