WATCH: Joe Hart has to restrain Mark Noble as he throws pitch invader to the floor

Fan footage has shown how Mark Noble had to be pulled away from a pitch-invading supporter by Joe Hart.

The incident happened during the closing stages of West Ham's home defeat to Burnley, shortly after the visitors had taken a lead through Ashley Barnes.

With a gathering of West Ham fans protesting about the club's owners by the directors' box, some supporters made their way on to the pitch.

Waiting to restart the game, the footage below shows Noble chase after the supporter, eventually grabbing hold of him and throwing him to the turf in a bid to get him off the field. As he stands over the supporter, Joe Hart is quickly on the scene to usher him away. 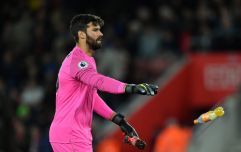 END_OF_DOCUMENT_TOKEN_TO_BE_REPLACED

Other footage showed another supporter grab hold of one of the corner flags before making his way to the centre of the field.

There were several more interruption before the end of the game, with David Gold and David Sullivan urged to leave the ground before the full-time whistle due to fears over their safety.


popular
Grant Imahara, co-host of Mythbusters, has died aged 49
Clive Tyldesley replaced as ITV's main football commentator
QUIZ: Identify 99 movies from the 90s by a single image
A definitive ranking of every swear word from worst to best
The hardest quiz on The Simpsons that you'll ever take (Part One)
Can you name every English football league club that begins with 'S'?
Macaulay Culkin reveals disturbing reason he left Hollywood as a child