Tyson Fury: Going bald is beautiful and should be embraced

"The Gypsy King's bald and it doesn't bother me."

Baldness is a body image anxiety affecting a large percentage of men, but Tyson Fury thinks losing your hair is beautiful and something to be embraced.

Speaking to JOE earlier this week, Fury says losing your hair should not take your confidence with it too.

"I used to have a lion's mane of hair but lost it all. Did it affect me? Nah. Did I let it get me down? Nope. Use it as a positive - you don't have to get it cut all the time.

"It's a sign of getting older, innit? Some people lose their hair, some people don't."

For anyone going bald, Tyson Fury says his advice would be just to crack on with your life - and not let it get you down. 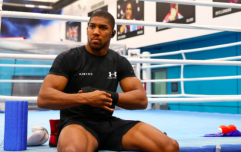 Anthony Joshua has 'a confidence issue', according to Tyson Fury

END_OF_DOCUMENT_TOKEN_TO_BE_REPLACED

"Embrace being bald," he said.

"Don't be in denial. Shave it off if it looks a mess. Get rid of it. Grow a beard, get some facial hair going. That's what I did, I've got the upside down haircut!"

Fury says social media has a lot to answer for when it comes to perpetuating an idealised male (and female) body image.

"You see all these perfectly built people. They're all ripped and they're all working out 24/7. All the girls are doing squats, all ripped in bikinis, and the men are the same.

"But when I go out, if I go to the first pub or first bar, I don't see any of these people. I just see normal people with bits of bellies on them drinking a pint of beer and women having a glass of wine."

Fury added that he is happy with his current weight - and it has never held him back in the boxing ring.

"I'm a two-time heavyweight champion of the world and I've never had a good body, ever. I've been in front of millions of people with my shirt off and I feel good about me.

The Furious Method: Transform your mind, body, goals by Tyson Fury is out now (Century £20 hardback)

popular
The JOE Friday Pub Quiz: Week 227
QUIZ: Name all 50 of these 2000s Champions League players
The Only Way Is Essex star Mick Norcross dies, aged 57
JOE Media is delighted to announce the signing of Rocket from Soccer AM
Police break up wedding party with 400 guests at school
Deep fake meme lads sing sea shanty that will make you want to abandon your childhood sweetheart and circumnavigate the globe
QUIZ: Match The Simpsons quote to the character who said it
You may also like
Sport
Tyson Fury unveils new Christmas t-shirt mocking Anthony Joshua and Eddie Hearn
Boxing
Tyson Fury tells BBC to remove him from Sports Personality of the Year shortlist
Sport
Tyson Fury admits he has stopped watching the news and using social media
Sport
Eddie Hearn: Tyson Fury's fight record 'laughable' compared to Anthony Joshua
Sport
Anthony Joshua warns Tyson Fury he intends to "break his head"
Next Page