For many years, footballers' diets were often no different than those of regular people. In the UK at least, footballers would eat heavy meals like steak before a match, sometimes even enjoying a little beer while they're at it. Let us not forget, either, that many players used to smoke at half-time. 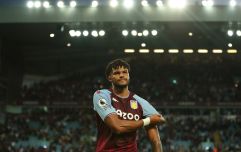 Tyrone Mings: I'm not in favour of a World Cup every two years

END_OF_DOCUMENT_TOKEN_TO_BE_REPLACED

Those days are long gone however, and an increasing number of professional athletes are moving away from exclusively eating meat to fuel them.

Spanish right-back Hector Bellerin is one of the most high-profile vegan athletes around, while NBA star Kyrie Irving is also said to eat a plant-based diet.

Tyrone Mings has now become the latest star to realise the benefits of introducing plant-based elements into his diet, and has partnered with Alpro to get the word out there.

“Between year-round training, competitions, and more, life’s been busy – and making sure I’m fuelling the right way is key to my performance, both on and off the pitch," he said.

"Eating more plant-based foods is such an easy way to make sure I’m getting in plenty of nutrients – including protein – and doing my bit for the planet too. Alpro Soya High Protein has become my go-to.”

Tyrone Mings has joined Adam Peaty, Nicola Adams, and Heather Watson to form Alpro's “Team PB” as they look to get the nation trying more plant-based protein and sports.

popular
Antonio Cassano reveals Cristiano Ronaldo ordered him to 'respect' his achievements
'Super recogniser' draws 'accurate' modern Maddie McCann to help police find her
Mum in jail for murder pays tribute to son, 6, killed by his dad and new girlfriend
Chilling video shows moment step mum tried to get away with murdering boy, 6
Jack Wilshere could be set to resume career with National League Wrexham
The JOE Friday Pub Quiz: Week 272
'I did three grams of coke during a game': Inside football's problem with Class A drugs
You may also like
Politics
Tory MPs shout 'Labour member' as Keir Starmer references Tyrone Mings in parliament
Sport
Petition for lifetime ban on racist football fans reaches 1 million
News
Over 800,000 sign petition to ban racists from football in England
Sport
Priti Patel's office will not respond to Tyrone Mings' criticism
Sport
Tyrone Mings slaps down Priti Patel for having her cake and deporting it too
Next Page