Tim Sherwood may have dropped down the divisions, but he's as animated as ever on the side line. 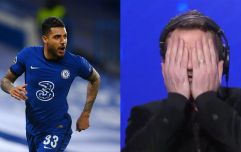 END_OF_DOCUMENT_TOKEN_TO_BE_REPLACED

In fact, it appears as though he's the team's manager in all but name. Luke Williams is the Robins' head coach, and seemingly takes training while Tim looks after tactics, team selection and the transfers.

You know, the fun stuff. Like a game of Football Manager where you designate training to your assistant.

Sherwood is making his presence felt on matchday, and has just landed himself in trouble with the Football Association.

The 48-year-old has been hit with a two game stadium ban after allegedly using foul language towards referee Mike Brown, during a game in February against Bury.

Sherwood wasn't happy with a penalty decision awarded against his team, and let the referee know about it.

The referee's report about the incident reads:

"After the half time whistle, and as I was walking down the tunnel Tim Sherwood of Swindon Town approached me and said: 'You're the only f***** in the ground that's f****** seen it, you f****** mug'. He then started pointing aggressively in my face."

"I told him to calm down, and stop pointing at me or he would be sitting in the stands for the second half. He then continued: "I wasn't even in the dugout, you f****** mug' and 'you would be doing me a favour'.

"I told him I wanted to speak to him at my dressing room, but he ignored me and walked off towards the Swindon changing room. I followed him and stood outside and told the coaching staff I wanted Mr Sherwood to come outside as I needed to speak to him.

"After approx 45 seconds Mr Sherwood walked out and walked past me and I informed him that he would be reported for his comments towards me.

"His reply was 'f*** off you mug'. I then entered my dressing room area and informed the stewards of my decision and that if Mr Sherwood tries to come down into the technical area he should not be allowed."

Sherwood admitted the FA charge of misconduct and has been fined £2,000 for the incident. Swindon are currently in the League One relegation zone.

popular
Patrick Vieira appears to kick fan after Everton defeat
'I did three grams of coke during a game': Inside football's problem with Class A drugs
Johnny Depp's lawyer Camille Vasquez responds to romance rumours
Amber Heard's acting coach explains exactly why she believes her tears are real
Man United cancel end of season awards after player requests
'Wow, hats off to her! Sick remark from Bobbi Anne McLeod's killer after she survived 12 hammer blows
Amber Heard told Johnny Depp to 'suck my d*ck' in secretly recorded audio
You may also like
Sport
Revisiting Aston Villa 15/16 and their disastrous relegation from the Premier League
Football
The forgotten managers of the Premier League roundtable
Sport
Tim Sherwod shortlisted to replace Steve McClaren at Queens Park Rangers
Sport
Tim Sherwood’s North London combined XI has come back to haunt him
Sport
Turns out that Dana White has a little bit of Tim Sherwood in him
Next Page