This Cardiff City supporter has made our weekend... (Video)

"Only those who dare to fail greatly can ever achieve greatly." - Robert F. Kennedy

That's very true, Bobby. But it's also f**king hilarious to watch someone fail greatly too. 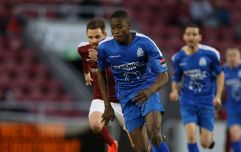 END_OF_DOCUMENT_TOKEN_TO_BE_REPLACED

We can't stop laughing at this Cardiff City supporter who brightened up his side's 2-0 victory over Wolves with a sublime effort to head the ball back into play.

From the moment he decided to take the initiative and leap from his seat, to the way he locked his steely gaze upon the ball, and ofcourse the epic outcome - it's pure slapstick.

We salute you, Mr Bluebird - you're a hero in our books...