We regret to inform you that FIFA is at it again

Those people at the world football governing body simply don't know how to stay out of trouble, do they? When former president Sepp Blatter left the organisation, it was hoped that it would usher in a new dawn of fan-first, transparent governance which would make the shady decades previously little more than a bad memory. 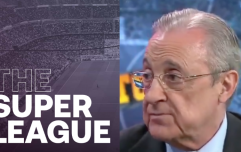 END_OF_DOCUMENT_TOKEN_TO_BE_REPLACED

That hasn't happened though, and instead we have seen current president Gianni Infantino embark on some sort of living, breathing Stars In Your Eyes scenario in which he imitates Herr Blatter every single day.

The moneymaking ideas at the FIFA HQ in Zurich have always appeared to be never ending but, even still, it was quite shocking to hear that if FIFA has its way, the United States/Canada/Mexico bid to host the 2026 World Cup will see ticket prices average out at a ludicrous £321, almost double the proposed price of rival bid Morocco.

The report, which appeared in the Daily Mail, revealed that the cost of tickets for the joint bid have been set so high due to the fact that the bid's differentiating factor will be its ability to increase FIFA's World Cup revenue.

Under the current projections, the joint bid has upped its revenue projection from a pathetically paltry £1.3 billion to a mighty £1.8 billion.

If nothing else this news has made us look forward to future schemes that FIFA comes up with to keep the cash flow coming, such as perhaps charging us for thinking, talking or even dreaming about the World Cup.

popular
New Zealand weightlifter set to make history as first trans athlete at the Olympics
Alan Carr's new show hit with Ofcom complaints because there were no white players
Spanish press target Eden Hazard for his reaction to Champions League defeat
Dad reported to police for walking with young daughter 'clears his name'
Family of murdered PCSO ask ‘where’s the huge outrage’ one week on from her death
There's no proof trans girls perform better in sport than cisgender girls, says doctor
Ole Gunnar Solskjaer "unhappy" with Gary Neville over anti-Glazer backlash
You may also like
Tech
The 'gamer lean' is real and it genuinely helps you win at FIFA
News
Super League: What are they proposing and why are people so angry?
Sport
Super League: Ensuring failure isn't an option for the cowardly cabal
Sport
Slavia Prague player given 10 match ban for racially abusing Rangers' Glen Kamara
Sport
Qatar World Cup protests are too late... but they're far from pointless
Next Page