Sven-Goran Eriksson opens up about his raw sexual magnetism

Former England and Manchester City manager Sven-Goran Eriksson is known for many, many things.

The Swede has enjoyed a very successful managerial career, winning almost eighteen club trophies between 1979 and 2000, and becoming the first manager ever to win a league and cup double in three countries, though he is probably best known as something of a ladies man. 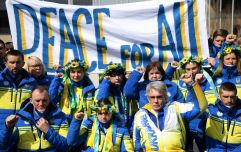 END_OF_DOCUMENT_TOKEN_TO_BE_REPLACED

Fresh from his most recent sacking in China (by poem no less), Eriksson spoke to Swedish website Expressen about his life, career and travels.

Of course, it wouldn't be an Eriksson interview if the topic of romance didn't come up, so here's a selection of what he had to say, including the reason he believes women find him so attractive.

When asked how he thinks he'll be remembered:

"I hope that people associate me with football, and what I've done there. But some may be thinking of women when they hear my name. Unfortunately."

When asked how much of what has been written about him is true:

"It's true that I met a lot of women, but that's about it.

"For example, I was never unfaithful to Nancy because we were not married. That is the way I see it, but the English press don't think like that."

When asked if he has ever cheated:

When asked why he thinks women fall for him:

"Money and status. Then you hope that there is something more too, but I do not know."

When asked who the love of his life is:

"Why can you not have more than one woman at the same time?

"It's not a good answer, huh? But I fall in love so easily."

So there you have it, the Sven-Goran Eriksson guide to love. You can have more than one woman at once, but just make sure that the British tabloids don't get wind of it.

popular
Landlord faces £40k fine after tenant puts swimming pool on roof of flats
Graeme Souness under fire for calling football a ‘man’s game' while sat with Karen Carney
Incredible case of the only known individual whose parents were two different species
Comedian cancelled after ‘getting his penis out on stage’ during Edinburgh Fringe Festival
Man with laughing condition like The Joker accused Joaquin Phoenix of stealing his persona
JK Rowling told 'you are next' after stabbing of acclaimed author Salman Rushdie
Man 19 years older than his wife shocked to learn he had met her when she was a baby
You may also like
News
Astrologer predicts how World War 3 would start and end - it doesn't look good for anybody
News
Why Nancy Pelosi's Taiwan visit is so important but could have dire 'consequences'
News
Scientist have been able to pinpoint where covid-19 actually came from
News
Man, 27, says he couldn't find work to support his family because he looks like a child
Entertainment
Noel Gallagher is banned from China for life after being branded an 'enemy of the people'
Next Page