Surprising Theo Walcott stat should silence some of the armchair critics

Walcott is often criticised for being hit or miss, but while his side aren't enjoying the greatest form this season, he most certainly is.

Bookmaker received $420,000 worth of bets on controversial Arsenal yellow card

END_OF_DOCUMENT_TOKEN_TO_BE_REPLACED

While his eight goals in the Premier League has been a decent return, it's his record in Europe that has been really impressive.

Heading into Arsenal's return leg against Bayern Munich in the Champions League on Tuesday night, the English forward had two goals in five appearances this campaign. 20 minutes into the game, he improved this return to three in six, with a spectacular piledriver from an acute angle.

That goal brought Walcott's overall Champions League tally to 15. While he's still trailing leaders Cristiano Ronaldo and Lionel Messi at the top of the all-time list, he is ahead of some legends of the game.

Zinedine Zidane, the O.G. original gangster Ronaldo and Arsenal icon Robert Pires have a paltry 14 goals apiece in the competition.

Freddie Ljunberg, Carlos Tevez, Dimitar Berbatov and Roy Keane are also among the players who have scored less on Europe's biggest stage than Walcott. 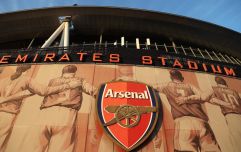 END_OF_DOCUMENT_TOKEN_TO_BE_REPLACED

Next time you get into a discussion with an Arsenal fan and you find yourself reverting back to the IT Crowd for a line to use, bust out that bit of trivia instead.

Unfortunately, Walcott's goal was his and his side's last of the evening. Any faint hopes of an unlikely Arsenal comeback were wiped out by the five goals Bayern helped themselves to in the second half.