To say Ben Te'o and Sonny Bill Williams have history would be an understatement.

There is no festering bad blood but there remains that shuddering, bouncing image of Te'o laying a massive hit on Williams when both men were earning their bread in rugby league, just over four years ago.

Back then, Te'o's Rabbitohs were up against Williams' Roosters and the hit got the former Leinster centre up on report. It was also said to be the tackle that convinced then-Leinster coach Matt O'Connor to lure him to Ireland.

END_OF_DOCUMENT_TOKEN_TO_BE_REPLACED

It was Te'o's former flatmate, one Israel Folau, that put him on the road to union. Four years on and the Aucklander, and England international, will wear the Lions No.12 jersey.

Te'o will be one of the Lions midfield tasked with shutting down the direct running and offloading game of Williams [the All Blacks' 12]. On The Hard Yards rugby podcast [from 29:45 below], two of Te'o's former Leinster teammates offered a clear idea of how he will try to unsettle his opposite number.

"He's going to bring that rugby league vibe to it. You saw it last weekend when he was mouthing at the opposition.

"He'll be following Williams around for the whole game, he'll be mouthing at him, he'll be trying to wind him up and he'll be in his face. I think that's the bit of rugby league culture in him but it will be a fascinating battle." 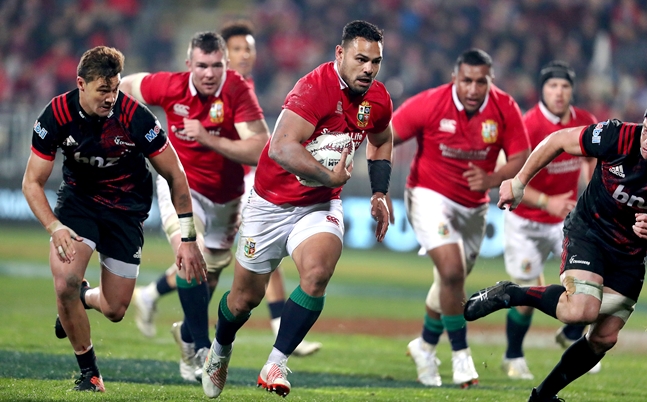 END_OF_DOCUMENT_TOKEN_TO_BE_REPLACED

Isaac Boss points out that Williams will be Lions outhalf Owen Farrell's man to tackle in defence, quite often, but Te'o will be keeping his eyes peeled for the inside-outside balls. "He relishes these battles," said Boss, "and he would like to go head-to-head with him a bit more.

"Ben likes to put the hit in but he's got to avoid tat temptation, to try to pop out to get that hit on Sonny Bill because he could expose him."

Of course, there is more to Te'o's game than trash-talk and big hits - evidenced by his midfield displays at the end of his Leinster career and his "finisher" role for England - but McLaughlin will be trying his best to lip-read during this First Test.

"He mightn't be encouraging his teammates," McLaughlin remarked, "but he'll be mouthing at the opposition, for sure... Maybe it's a bit of an Aussie thing - in cricket, it happens with sledging. You're in their face and you're trying to make it uncomfortable.

"If that's what makes him stop Sonny Bill getting an offload away at the weekend. we'll take it."

popular
Motorcyclist dies in crash live on TV while trying to escape police
New Highway Code rule will fine drivers £1,000 for opening door with wrong hand
Fitness expert reveals army technique to fall asleep in two minutes
Bookmaker received $420,000 worth of bets on controversial Arsenal yellow card
Woman who saved enough to retire by 26 reveals three golden rules she stuck to
Dead man ‘propped up by two other men in attempt to collect pension at post office’
A definitive ranking of every swear word from worst to best
You may also like
Sport
English star apologises following arrest in the wake of Lions tour
Sport
There can surely be few arguments about Lions' Player of the Series
Sport
Here's what Sam Warburton said to the referee to get that crucial penalty reversed
Sport
Tadhg Furlong bosses player ratings as Lions stage stunning comeback against New Zealand
Sport
A lot of people harshly blaming one Lion after New Zealand blitz
Next Page