Could a change be on the way for the Guinness Six Nations?

The 2020 Six Nations is 20th anniversary of the first tournament to involve Italy. Previously the competition had featured Ireland, Scotland, Wales, England and France - but the desire to expand saw the Italians join. 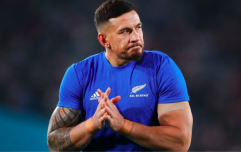 END_OF_DOCUMENT_TOKEN_TO_BE_REPLACED

A similar call has been made again in recent years, with the growth in strength of certain Tier 2 nations, particularly Georgia, leading to calls for the competition to introduce promotion and relegation.

We caught up with All Blacks legend and Laureus World Sports Academy chairman Sean Fitzpatrick - one of only four hookers in the World Rugby Hall of Fame - to discuss that proposed change, and spoke further about the game in general, and his appearance in the historic 1995 post-apartheid World Cup final.