Since Maurizio Sarri took over from Antonio Conte at Chelsea, the club have been linked with Gonzalo Higuaín. The Argentine striker is in danger of losing his starting place at Juventus with the arrival of Cristiano Ronaldo in Turin, and could reunite with Sarri at Chelsea. 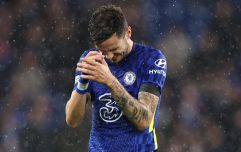 END_OF_DOCUMENT_TOKEN_TO_BE_REPLACED

However, that now seems unlikely after what Chelsea boss Sarri said after Chelsea's win over Inter Milan yesterday.

"Higuain? I’m waiting for the best version of Morata. He has improved a lot in the friendlies in Australia, so I’m satisfied and I’m confident in him for the future," the Italian coach said.

So, it would seem like Morata will be staying put despite his nosedive in form last season and will lead the line for Chelsea this season.

Chelsea fans will be hoping that Morata can discover the form that he showed at the start of last season, before he sustained a back injury. He looked sharp against Inter Milan in Saturday's friendly and played a big part in the opening goal scored by Pedro.

The Spanish striker has all the necessary tools to make it in the Premier League - he is a threat in the air, he can link up play with his feet and he is not short of pace.

The only worry for Chelsea will be that Morata's finishing was substandard to say the least in the second half of last season. Sarri will be hoping that a productive pre-season and a good start to the season will help the striker rediscover the confidence he needs to be composed in front of goal.

Higuaín, meanwhile, seems likely to go to AC Milan in a deal that will see centre-back Leonardo Bonucci go the other way. Young Juventus defender Mattia Caldara will also head to the San Siro as part of the deal.