Two minutes left on the clock and Owens snatched a ball dropped by Liam Williams while in an offside position. He held the ball for all of a second before dropping it and raising his arms in feigned innocence.

END_OF_DOCUMENT_TOKEN_TO_BE_REPLACED

Referee Romain Poite blew for an offside penalty and the Lions looked done for.

Lions captain Sam Warburton was about to kick into action but, first, he got a holler from a teammate to tell him Kieran Read, his opposite number, had jumped into Williams as he tried to claim the catch. 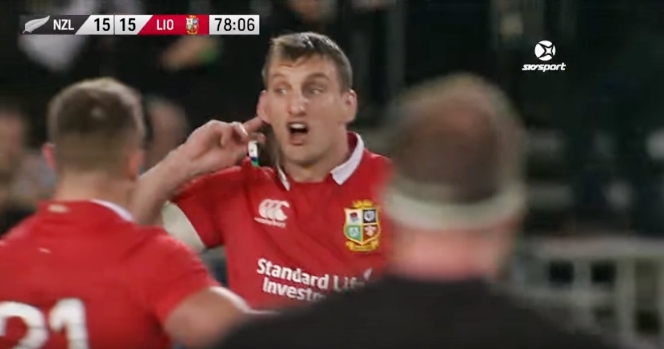 Both Warburton and Read converged on Poite and the Welshman informed him about New Zealand interference.

END_OF_DOCUMENT_TOKEN_TO_BE_REPLACED

"Check in the air," said Warburton. "Definitely not a penalty."

Poite asks Read if he would be happy to check the replays. "Very!" was his reply.

As Poite got in touch with television match official George Ayoub, Warburton turned to his teammates and advised them to pipe down. Leave the talking to me. 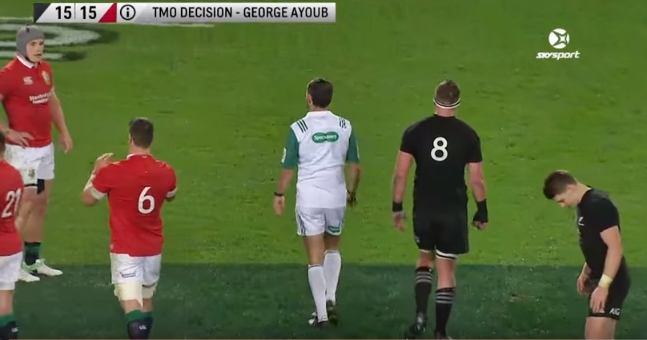 END_OF_DOCUMENT_TOKEN_TO_BE_REPLACED

Poite appears to be happy that the ball came off Williams and was caught by Owens. Read commiserates with the Lions captain, who then instructs his team to 'Set up for the quick-tap' penalty.

Assistant referee Jerome Garces then gets involved and Poite gets the two captains back together.

Poite: "It was an accidental offside."

Warburton has heard enough. He signals for a scrum to his teammates and gets them to set up as quick as possible, before Poite can change his mind again.

The French referee gestures towards his shoulder to suggest that the ball came off Owens' there, which the replays do not show.

Boos rang out and the All Blacks were denied a relatively simple kick at the sticks.

Following the 15-15 draw, Lions coach Warren Gatland told reporters, "I thought it was a penalty to us.

"I thought Kieran Read - I didn't think he had any chance of getting his hand on that - that was my initial thought. That he had hit the player in the air.

"I can understand that he is saying he competing for that, and the ball has come (down) and landed in Ken Owens' arms. In fairness to the man next to me (Warburton) he has been quite smart and astute and been able to talk the referee from a penalty into an accidental offside."

Aside from having two decent personal performances, after being benched for the First Test, Warburton has proved to be a master at coaxing favourable decisions out of referees and TMOs.

Needless to say, the Kiwis are livid.