Rui Faria appears set to become the new manager of Aston Villa, it has been claimed

Faria is now said to be favourite to take the job after it emerged Thierry Henry had turned down the opportunity to manage the Championship side.

A report on The Telegraph claims Henry informed Villa that he was not interested in replacing Steve Bruce as the club's manager on Tuesday night. He is thought to be one of the candidates in the frame to replace Leonardo Jardim at Monaco, one of his former clubs.

Faria, who spent 17 years working alongside Jose Mourinho, is now favourite to land the job after leaving his position at Manchester United in the summer to pursue a career in management. 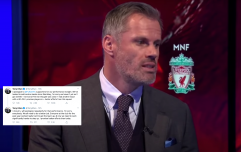 END_OF_DOCUMENT_TOKEN_TO_BE_REPLACED

If Faria does take the Villa job, the report suggests John Terry - also one of the names in the frame to become the next manager - will become his assistant.

Terry knows Faria from his time playing under Mourinho at Chelsea. He also spent last season as a player at Villa, leaving after they missed out on promotion with a loss to Fulham in the Championship play-off final.

Villa have made an underwhelming start to the Championship season and currently sit in 15th position after the first 12 games. Bruce was dismissed after their 3-3 draw with Preston North End, a game in which one disgruntled supporter threw a cabbage in his direction in protest.


popular
CBBC star Archie Lyndhurst has died aged 19
Beyond The Mat remains the greatest wrestling documentary of all time
QUIZ: Match the quote to the It's Always Sunny in Philadelphia character #2
Borat tries to kill COVID with a frying pan in first sequel trailer
QUIZ: Name the US States which contain the letter ‘S'
Henry Cavill speaks out on Enola Holmes copyright lawsuit
From Ronaldo to James Rodriguez, the ultimate Jorge Mendes XI