Remember the blind hope ahead of the 2005 Lions Tour? Roy Keane didn't buy into the hype.

Hector O'hEochagain set course for New Zealand to make Chasing the Lions which he would have been hoping would document a famous tour win over the All Blacks. 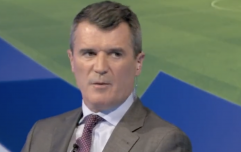 END_OF_DOCUMENT_TOKEN_TO_BE_REPLACED

Then Brian O'Driscoll's tour was cut short by that horrific spear tackle from Keven Mealamu and Tana Umaga and everything started spiraling to shit after that.

The Lions went back to their hemisphere with their tails between their legs.

Austin Healey's Lions team to beat New Zealand contains a man not even on tour https://t.co/hr4guMYiDL

Before jetting off to the other side of the world, the Lions were staying in the same hotel as Manchester United, who were set to take on Arsenal in the FA Cup final in the Millennium Stadium.

Shane Horgan and Lawrence Dallaglio, who were a part of the Lions squad, ran into Roy Keane to get his take on the upcoming tour. As they told the Sunday Times though, Keano didn't exactly give them the pep talk they would have liked.

Shane Horgan: "Before we left for New Zealand, we were staying in the same hotel in Wales as the Manchester United team, who were there for the FA Cup final against Arsenal."

"We fell in with some of the players, and asked Roy Keane what he thought our chances were..."

Lawrence Dallaglio: "'3-0 to New Zealand, you're gonna get smashed."' Part of me knew what he was saying was true but it's one thing thinking it, it's another to be so blunt in saying it.

SH: "There's a social convention where you tone down that kind of thing but he was in full Roy mode. It wasn't very inspiring."